The presence of an extraordinarily narrow cycle lane on Shelford Road raised some strong and opposing feelings about its usefulness and safety recently. So we asked the question, are narrow cycle lanes better than no cycle lanes at all? What do you think? 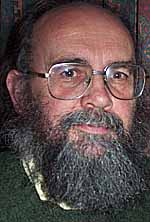 says Jim Chisholm, who wonders, are we pragmatists or zealots?

I’ve been cycling into Cambridge for some 15 years. Most of these journeys are in ‘the peak’, typically arriving in the city centre at 8.45 am and departing at 5.30 pm. Unlike some, I support the use of ‘substandard’ width cycle lanes, and I hope the reasons I set out below will convince many that the use of such narrow lanes is justified by the advantages they give.

A significant part of my normal commuting trip is alongside stationary or slow moving traffic. In such situations some motorists consider ‘undertaking’ by cyclists unreasonable (we don’t pay any road tax, do we?) and will deliberately move close to the kerb. A more typical response is to remain central in the lane with cars leaving less than a metre, and lorries less than 700 mm between themselves and the kerb. There is some doubt about the legality of ‘undertaking’ in such conditions, although paragraph 139 of the Highway Code states 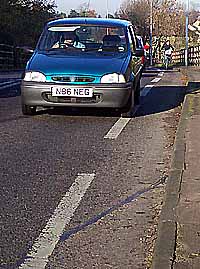 ‘stay in your lane if traffic is moving slowly in queues. If the queue on your right is moving more slowly than you are you may pass on the left’.

In such congested conditions cars often turn left, or worse still turn right through the queue without checking for the presence of cyclists.

In these conditions, the existence of a cycle lane gives a clear right for cyclists to proceed at a speed greater than that of stationary traffic, a clear indication that cyclists will exist, and a clear obligation on motorists to observe the rights of users of this cycle lane.

There is no question that when the space and conditions exist a full width mandatory lane is the best solution. If there is insufficient width, or a need to allow some vehicle to stop, what do we do? I maintain that under these conditions, lanes of less than the recommended minimum of 1.2 metres serve a useful purpose. In areas where existing traffic lanes are around 4 metres, a 1 metre cycle lane is likely to provide a ‘car free space’ of around 1.5 metres with a car central in its lane. Advisory lanes may have to be used when motor vehicles occasionally need to enter these lanes.

There are other locations where cyclists feel vulnerable and resort to illegal pavement cycling. Once again, narrow lanes would help them. These should only be used where the provision of 1.2 m wide lanes would reduce the remaining lane to significantly under 3 m and traffic speeds are restricted. If the provision gives greater confidence to less experienced cyclists and allows an otherwise discontinuous route to be ‘joined up,’ its provision should have significant ‘net’ benefits to the community.

I try to take a pragmatic view over cycling provision: we should aim to achieve high standards, but there will be occasions when routes cannot be ‘joined up’ without vast expense unless we compromise. I have used the Cambridge Road bridge in Shelford that Myra mentions for about 5,000 trips, i.e. every day in the ten years since the lane existed, and this is one place where I have never had a serious conflict. 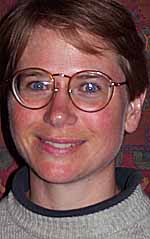 Many cyclists think that bike lanes are wonderful. They give you your own space on the road and allow you to bypass queues of traffic during the rush hour.

However, there are plenty of drawbacks. One of the worst situations occurs when the cycle lanes are too narrow. The bike lane painted on the bridge over the old railway line heading into Great Shelford is a prime example. The white line here is just over two feet from the kerb, and the ‘car lane’ also is quite narrow. In addition, visibility is very limited by the hump of the bridge.

It is simply not safe for a driver to overtake a cyclist without crossing the white line in the middle of the road, but the presence of the cycle lane encourages just such behaviour. It encourages cyclists to ride far closer to the kerb than they should. If you cycle in the middle of the lane, it would only take a rock or gust of wind to drive you into the kerb and off your bike. It encourages drivers who see a cyclist hugging the kerb to overtake while remaining in their lane, leaving an excessively narrow gap.

I ride outside the cycle lane whenever I go over that bridge. Motorists may get annoyed, but they do wait behind me until they can see over the brow of the bridge, and then, if it is safe, they cross the line to overtake me.

The presence of the cycle lane there does absolutely no good; it does only harm. If a cyclist rides within the lane she is encouraging drivers to perform unsafe overtaking manoeuvres; if she rides outside the lane she risks irritating motorists by ignoring a ‘cycle facility’ put there at taxpayers’ expense.

This cycle lane should be removed immediately.

Jim says that narrow cycle lanes can help cyclists bypass queued cars. This is true. This is, in my opinion, the main benefit of cycle lanes in general. Note that this is a benefit for convenience, not safety. However, the cycle lane that sparked this discussion is well out of town, and there will almost never be queues of cars here. Thus there is no convenience benefit, only increased risk.

Jim also says that narrow lanes help to reduce illegal pavement cycling. These cyclists tend to be the least skilled of all and are far more likely to be caught out by the hazards of cycle lanes. The main danger is getting caught by left-turning cars: an inexperienced cyclist feeling safe and protected will fail to look out for cars, or more dangerously, lorries, signalling left. A narrower cycle lane exacerbates the problem. A wide cycle lane moves the cars well away from the kerb, and this reminds drivers to look out for cyclists. Where there is a narrow cycle lane they are driving at their normal distance from the kerb, so may forget its existence.

Another common danger is that of passengers thoughtlessly opening doors. Narrow cycle lanes make this more likely to result in injury to the cyclists. Again, the narrower the cycle lane, the easier it is for people in the car to forget about them. In addition an open car door is more likely to block the entire path, leaving an approaching cyclist no space. Beginners are particularly vulnerable.

Thus the provision of a cycle lane, especially a narrow one, will have a more negative impact on an inexperienced user than an experienced one.