The University of Cambridge realised in the 1960s that it would have to move some of its departments out of the city centre due to limited space. They identified the West Cambridge site, between Madingley Road, the M11, the Coton footpath and Clerk Maxwell Road. There have been several University buildings in the area for many years, including the Cavendish and Whittle Laboratories and Veterinary School as well as independent companies Schlumberger, British Antarctic Survey and Cadcentre.

In 1997 the University presented its plans for re-developing the West Cambridge site, including

Although the site was initially going to be developed over thirty years, the pace is now faster than envisaged. So far, building work has been started on the Computer Sciences Department, Microsoft’s European Research Centre and the Park & Cycle facility. planning and consultation for the East Forum has just started.

Part of the mound between Clerk Maxwell Road and the Cavendish Laboratory will be removed to provide access from Clerk Maxwell Road and a new bridge (see plan – A), a route that is heavily used judging by the current mud in the winter! I am a little concerned about the loss of the second entrance to the Cavendish Laboratory (C). This could provide a useful link, particularly at rush hours, and the main improvement this needs is to cut down some of the hedge either side to provide decent visibility. Although cycling is not permitted through the East Forum there is going to be a new entrance (E) to the west end of the East Forum and linking with all the cycleways and roadways on the site.

Although the Park & Cycle site is located at the West Cambridge site, it is designed for people working in University departments in the centre of town who live too far to cycle all the way to work.

People will be able to drive to the West Cambridge site and cycle (or walk) the last part of the journey on a traffic-free route instead of crawling in a traffic jam down Madingley Road. Ultimately, there will be 300 car parking spaces and 450 bicycle lockers. Initially, though, there will only be 150 lockers whilst demand is assessed. The area will be well lit, with CCTV and alarm telephone points. A new bridge is being built at the end of Clerk Maxwell Road that will join up the Coton Footpath, and this should be in place by the time you read this. The Park & Cycle site should be operating by January.

In the future there will be a shuttle bus between town and the West Cambridge site. Work still needs to be done to make sure it is convenient for people to Park & Cycle and use this bus. It is hoped that a pilot service will be in place by September 2001.

There is already a route from the West Cambridge site to town: along the Coton footpath, Adams Road, across Grange Road and down Burrell’s Walk, across Queen’s Road and over the river on Garret Hostel Lane to Senate House Passage and the market square. Unfortunately, the Coton footpath is not as smooth as recent cycle paths (like Barton Road), but it has a kerb between the cycle and pedestrian sections which ensures that cyclists can proceed at a reasonable rate and that pedestrians know that they are safe from cyclists. This path will be widened to 2 m wide for pedestrians and 3 m wide for cyclists. I have been assured it will be ‘highway quality’ so no more bone shaking bumps! The path will be widened by summer 2001. But is 3 m wide enough for what will be the busiest cycleway in the country? Where the path joins Adams Road there is currently a chicane. The Campaign has asked for this to be either removed or widened to 3 m. Where the route crosses Grange Road a raised table is being constructed to reduce traffic speeds and make it easier to cross. When cycle traffic reaches a certain level the situation will be reviewed and traffic lights may be installed. Where the route crosses Queens Road there are plans for a new crossing. We would like to see a crossing arranged like a cross roads which you cycle over rather than the current chicane and dismount affair.

Coton to the East Forum

This section of the path will not be widened: the plans are just to tidy it up a bit, trimming the hedges, cutting back weeds, defining the edge and maybe a new surface. The hedges are in quite poor state so they will be thinning and replanting to improve the wildlife corridor. The time scale for this is as yet undecided: a probable time is when the East Forum is being built. They are also looking at improving the two blind bends between West Cambridge and Coton. We have suggested a minimum radius of 2 m, though there are no plans as yet.

Because of the predicted high levels of cycling, there will be another link from Silver Street to the West Cambridge site via the University Rugby Ground on Grange Road. The University is negotiating with the landowners (Jesus and St John’s colleges) to decide the exact route. This will tie up well with the plans to improve the junction of West Road and Queens Road. So far, only a proposal has been produced, though it does include traffic lights, Advance Stop Lines and a much-improved route across Queens Green to Silver Street.

One link that is missing at the moment is from the Queen’s Road end of Garret Hostel Lane, along the Backs and Queens Green to Silver Street. This would allow cyclists using either route from West Cambridge to cross onto the other route. There is currently a main pedestrian path and a second path further away from the road which would make an excellent cycleway to Silver Street. I hope that the fence on Garret Hostel Lane will be opened to allow this. It is still unknown what the Council will do about Adams Road. Here, the narrowness of the road, car parking on both sides, the prospect of car doors opening, and overtaking motorists from behind make it very intimidating for cyclists. Will parking be banned?

The East Forum development will be one of the main social places for the West Cambridge site. It is expected to contain catering facilities, a convenience store, a bar-restaurant and a day nursery for 84 children, all grouped around a central open plaza, landscaped with places to sit, meet and socialise.

Cyclists will be able to turn off the Coton path and go over the new bridge, but they will not be allowed to ride through the Forum itself. Cycle parking will be provided near the entrance and cyclists will be able to push their bikes through. There will be a cycle route around the west end of the East Forum, linking with the main cycle routes. How this negotiates the car park in East Square has yet to be worked out.

Routes on the site 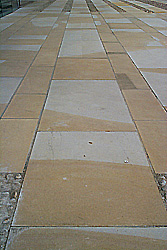 There will be a cycle path down either side of the access roads B and C. The latest proposal to surface this with 160×200 mm paving slabs has raised some concerns about these as a suitable surface for riding on. The general consensus was that they need to be:

I understand that there is an example of the slabs they wish to use in the public area of the new housing development off Tenison Road near the railway bridge. We have also asked that any traffic calming on the roads in the site is cycle-friendly, as many cyclists will be using these roads.

Also proposed is a left turn lane for traffic coming from town wishing to turn into the West Cambridge site. This will cause problems for cyclists using Madingley Road so we have asked for a straight-on lane for cyclists with a proper entrance as on Huntingdon Road. Although the West Cambridge site has the Park & Cycle and current cycle/driving rates are at the moment at about 50% of its capacity, the site is sure to add to the traffic on Madingley Road. This is a road which, even at the moment, is unpleasant to cyclists. We have asked for Advance Stop Lines on all approaches as well as a reduction in the speed limit from 40 mph to 30 mph.

For more information, visit the West Cambridge web site. Members of the University can use the web consultation section to see other people’s comments and add their own.

If you are interested in keeping up with and reviewing West Cambridge cycling developments, consider joining the Campaign’s West Cambridge subgroup. We meet every few months, but have an email list for discussions between meetings.