The Mildenhall Cycle Rally was held on the bank holiday weekend of Saturday the 26th through to Monday the 28th of August. 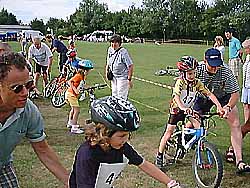 Despite having lived in or around Cambridge for many years now, I’d not visited the rally before. Having seen details on the web page, I had booked my six year old daughter to race in the children’s duathlon on the Monday. In order to take her bike up to Mildenhall, I knew I’d have to drive, so I also cycled with some friends for a look around on Saturday.

The ride up the B1102 was very pleasant (especially from Burwell onwards as there was less traffic), it was about a 50 mile round trip. Unfortunately, having got there, there was very little to do. We had missed the racing events in the morning, and most of the people camping at the event were, I imagine, out riding their bikes.

It had been my intention to look around the cycle jumble, though sadly this didn’t start for viewing until 6:30 pm and we were ready to go home before that time.

So apart from the pleasant ride and good company there and back, quite a disappointing day on Saturday. I’m sure that those who were on day rides were having a great time, but there was little to do for a day visitor who’d arrived after those rides had set out.

I was still committed to travelling to Mildenhall on Monday with my family.

This turned out to be a very good thing, as it was a far more enjoyable day. Apart from the aforementioned children’s events, there was also grass track and MTB racing, both very enjoyable to watch. Also, the trade stalls were open, and there were many interesting products to peruse and many bargains to be had.

I regret that we had not camped at the site this year. I think that would have been far more rewarding than the day visit on Saturday. If we don’t camp next year, I will definitely go to one of the trade days prepared with a list of items I could use.