In recent years the number of places in Cambridge streets where cyclists are ‘squeezed’ has increased dramatically. Indeed, one of the first things we achieved was the narrowing of the build-outs at the Jesus Lock pedestrian crossing. If you are interested in contributing to work aimed at raising awareness of the hazards posed to cyclists by build-outs and central reservations, please contact Richard Taylor

The Cambridge Cycle Route Map is about to enter its third print run, in time for this year’s arrival of University students. A total of 20,000 maps were printed in the first year.

Anglia Railways has received a grant of £56,000 from the Shadow Strategic Rail Authority to provide cycle facilities at all its stations. 520 Sheffield Stands will be provided at various stations. Additional money for the project will come from Railtrack, Local Authorities and Anglia Railways itself.

British Summer Time ends on Sunday 29 October – so lighting-up time is an hour earlier. See this month’s lighting article for advice on checking your bike lights!

A sixteenth local business has agreed to offer discounts to Cambridge Cycling Campaign members. The Bikeman has a stall in the Market Square, every Monday to Thursday, from 8 am to 5.30 pm. 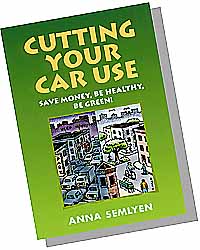 Cutting Your Car Use is a 160-page pocket-sized book written for people who want to either reduce their car use, or give up car ownership altogether. Contents include ‘Why Cut Your Car Use?’, ‘Travelling Less’, ‘Making Better Use of the Car’ and ‘What are the Alternatives?’ It’s written by Anna Semlyen, ISBN 1 870098 87 0, available from Green Books

Transport 2000 has been successful in its bid to overturn the Association of Chief Police Officers (ACPO) policy not to stop motorists in 30 mph zones until they reached 35 mph. Transport 2000 had threatened legal action, arguing that the law defined 30 mph as the limit, not 35 mph – and ACPO was not entitled to redefine the limit.

Our requests to the shadow Strategic Rail Authority – for new rail franchises in this area – are on our web site. We placed much emphasis on the high levels of cycling, and therefore the need for cycle provision within the local train network. The sorts of numbers quoted elsewhere in the country, like 6 bikes per train being a huge improvement, would be woefully inadequate here. We have called for a minimum level of 4 bikes per carriage. 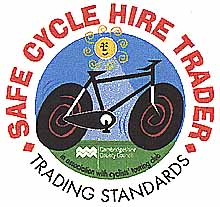 The County Council submitted the Full Cambridgeshire Transport Plan to the government at the end of July, and has since been working on summarising and publishing it for the public. By the time this Newsletter is complete, the plan will be available in printed form, on a CD-ROM and on the Internet. We’ll have cycling-related coverage of the plan in the next newsletter.

Over 4,200 cyclists took part this year’s London to Cambridge Bike Ride and pedalled the 58 mile route through picturesque countryside. Over £15,000 sponsorship money was handed in on the day, and to date Breakthrough Breast Cancer has received over £100,000 with money still pouring in. Their target is £180,000.