The Girton Review of March 1894 reports that, ‘Bicycling has been the chief amusement of considerably more than half the College this term. From the early hours of the morning till dark at night, figures are seen riding round the woodlands and gravel tennis courts. There are five hired bicycles in use, and after passing an examination satisfactorily, permission may be obtained to ride in the country roads.’ 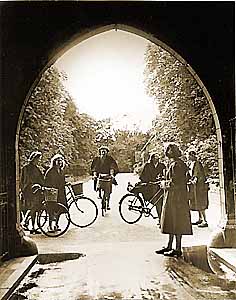 ‘At a general meeting of College it was decided to form a bicycle club to be called the Girton College Bicycle Club with five elected officers. 50 members joined and 4 bicycles were hired. 2 of which were for the use of learners. The other two for use on the road. The first bicycle hired fell into the hands of several beginners, who learnt so eagerly that the owner was requested to fetch it back in an unrideable condition, the frame being broken in three places. As the owner intended to send out four quite new machines, he thought it would be more satisfactory for all parties concerned if he gave lessons to the beginners in order to prevent breakages; so after giving the Club satisfactory credentials, he was engaged to teach all the beginners to ride. At the end of term the Club was found to be in a solvent condition – more than the members had dared to hope at the start’.

‘The Bicycle Club is still in existence and has not, as many prophesied, died a natural death. The number of members has fallen off considerably as there were so many among the year which has just gone down, but there are several new members, and we are expecting that more will follow in their footsteps. Four bicycles have been hired this term, one of which has been sub-let to the learners.’

‘Not much riding has been done this term, owing to the inclemency of the weather, and the consequent state of the roads, so that the two machines which we have hired have been very little used’.

‘The Club was divided into two divisions this term – the one consisting of members who use the Club bicycles, the other of those who have their own, and join at a reduced subscription. A shed was hired by the Club at the top of Castle Hill, where bicycles can be left by members riding into Cambridge. Two bicycles, one pneumatic and one cushion tyre were hired by the Club this term’.

‘Two pneumatic bicycles were hired by the Club this term, and were kept temporarily in a shed at the farm buildings. At a meeting of members, it was decided to collect subscriptions for a shed to be built within the College grounds’.

‘It was found necessary that some arrangement should be made for housing the bicycles, as so many students had brought up machines of their own. The Executive Committee gave permission for a shed to be built behind the gymnasium, on condition that the Club should guarantee the repayment. The shed was ready by the beginning of term and has been found thoroughly satisfactory. During this term a boy has come daily, for an hour, to clean the bicycles. At a meeting of members, the following motions were proposed and passed:

That the subscription of members belonging to division B (those with bicycles of their own) be raised from 1s 6d to 2s per term, in order to give some help towards clearing off the debt incurred by the building of the shed.

That at the direction of the officers any member may be called upon to pass the [cycling proficiency] test again’.

‘The shed, which the bicycle Club put up last vacation, answers its purpose most successfully. A great many students have brought up their own machines and the shed, which is a good big one, is already nearly full. The bicycles line three of the walls, there is also a row of stands down the centre and these too are all occupied by bicycles. There are two rows of pigeon holes on either side of the door, where cyclists may keep their dusters, etc. Outside the shed there is an apparatus for swinging the machines, and great facility is thus afforded for cleaning them’.

‘2 bicycles, both pneumatic have been hired by the Club this term. There are now 65 members in the Club, 38 of whom have bicycles of their own. The stands in the shed have been re-arranged, and by this means additional accommodation for 8 bicycles has been provided’.

‘The Club has paid off the debt incurred in building the new shed, but more room is still required as the number of bicycles brought up increases each term’.

‘This term one bicycle only has been hired by the Club. The debt on the shed has now been cleared off, and it was therefore thought advisable to make some alterations to the rules. At a meeting, motions were passed to the effect that the Club should consist of 2 divisions:

Division A – members who use the bicycles provided by the Club, the cost of hiring being divided between the members of this division.

Division B – all members who use the premises of the Club, the subscription being 1/- per term.

The gymnasium has been handed over for the use of the Club [for bicycle parking]’.

‘It was decided to extend the present bicycle shed, as there was not sufficient accommodation for the number of bicycles. With the help of increased subscriptions and donations, the Club hopes to pay off the debt thus incurred.

‘Early in the term the rules of the Club were reconstructed. Students are now allowed to bicycle on Sundays’.

‘Arrangements …[to be] made for leaving bicycles at Lawrence’s, 16 Silver Street instead of Glasscock’s.’

‘After Christmas, bicycles should not be left in the yard at Castle End Post Office; and arrangements have since been made to use a part of the stable belonging to Castle Inn’.

‘In consequence of courses of lectures held in Cambridge, which involved returning after dark, Miss Jones [The Mistress] consented to allow members to ride not less than three together after dark, unaccompanied by a don’.

‘It was proposed that the bicycle Club be abolished and that a bicycle secretary be elected to carry on the duties, under the authority of the SRC. This was carried unanimously.’

The bicycle sheds still have wooden ‘V’ grips for undergraduates’ bikes. Some bikes hang from the sheds’ rafters; others are locked to trees, fences and railings. The College plans to build and pay for yet another bike shed. The JCR (undergraduates’) Bike Representative organised a bike maintenance workshop for freshers.