Despite the Christmas break there are four recent items of interest to report: plans for Hills Road, the Beehive Centre and Regent Street, and a further consultation on the railway station area.

An exhibition in December publicised proposals for a new shared-use path on the Homerton College side of Hills Road between Long Road and Purbeck Road (next to Hills Road Sixth Form College), and a return path from the new Park and Ride site at Babraham Road to Hills Road.

Two options were given for Hills Road: an unsegregated path or a largely segregated one. In both cases the existing cycle lanes would remain.

We think this scheme is a waste of money, but the decision to build cycle facilities as part of the bus scheme was made a couple of years ago. I am amazed, though, that the County Council can still suggest unsegregated shared-use in a heavily used area. What are they thinking of? The unsegregated option is, as usual, too narrow and makes cyclists give way to cars at side roads.

And once again, the needs of the large number of people who make various ‘interesting’ manoeuvres to get into Addenbrooke’s have been ignored.

Who to contact : Richard Preston at the County Council is dealing with this scheme.

An exhibition of plans to redevelop the Beehive Centre off Coldham’s Lane was held before Christmas. This has two issues of interest for us: one a threat and the other an opportunity.

The plans, as displayed, appear to sever the existing York Street-Coldham’s Lane link by plonking a bus station in the middle of it, and new cycle parking is placed at the wrong end of a long pedestrian walkway. Duh! We’ll be contacting the City Council’s planning department and the developers about this. Of course the present arrangement is not ideal: part of the path has severe barriers and cyclists dismount signs; the York Street end has bumpy kerbs; and the roundabout at Coldham’s Lane is difficult.

But on the plus side, redevelopment of this site does open up possibilities for the Chisholm Trail alongside the railway. 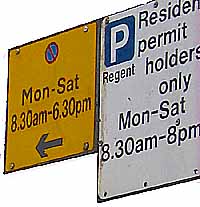 Regent Street proved to be a bottleneck for the new Park and Ride service so a special committee meeting was convened to approve some experimental modifications: parking will be significantly limited; the signal stop line at the Catholic Church southbound will be moved; the northbound bus lane will be extended slightly; the build out at the pelican crossing by Howes cycle shop will be removed. Indeed by the time you read this they are likely to have been implemented.

These measures should be good news for cyclists in Regent Street, resulting in less conflict with buses and other vehicles and a less obstructed ride.

However, the committee decided that they would also consult on removing the one remaining bit of parking near Downing College and, in compensation, extend the period for parking on Regent Terrace to include the peak times of cycle flow along this busy cycle route.

Who to contact: Richard Preston at the County Council.

We have reported on development plans for this area in the past but in late November, Railtrack, prompted by the City Council, held a consultation day to get some additional feedback from residents and interest groups. This was a rather useful meeting, and allowed some of the wider aspirations for cycle parking and through routes (among them the Chisholm Trail) to be put directly to the people designing the scheme. In particular, the idea of a cycle store was well received, though that is no guarantee that it will actually happen. One excellent idea, I thought, was to site such a store under the main square outside the station.