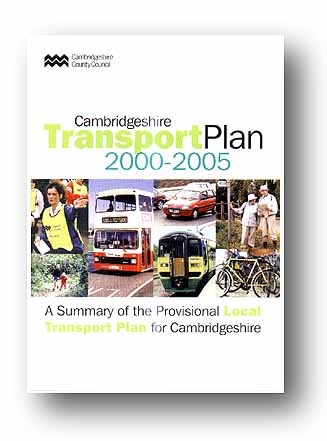 Cambridgeshire County Council has published its first ever Local Transport Plan. This is essentially a request for government funding for transport schemes. It replaces the ‘Transport Policies and Programme’ (TPP) document that was submitted in previous years. Whereas the TPP covered just one year, the Local Transport Plan (LTP) covers a five year period ending in March 2005. The idea is that the LTP sets out a long-term strategy for transport, the government approves it, and then hands over the money without needing to pay as much close attention to how it is used, safe in the knowledge that the council is following a coherent long-term transport strategy.

This Transport Plan is described as ‘provisional’, and the council plans extensive consultation this autumn before formally adopting a ‘Full Transport Plan’ in July 2000. Much of the full transport plan has, in fact, yet to be written. The section on cycling, for example, simply quotes from the council’s existing 1996 cycling strategy, adding that a revised strategy will be reported in the full plan. A section entitled ‘target for traffic reduction’ simply states ‘target being developed’.

More of the Same

The detailed proposals for the Cambridge area follow pretty much the pattern developed over the last few years.

Within Cambridge, the council accepts that alternatives to the car provide the only way forward. Outside the city, however, the council believes that for many people there is no realistic alternative to using a car, and so car use and traffic levels will continue to increase, and there is little that can be done about it.

Overall, the plan takes little if any account of any of the proposals we made earlier this year when the council first asked for comments on the Local Transport Plan. The main point we made was that the council should take cycling more seriously and recognise the contribution that it already makes, and can make in the future, to transport in the Cambridge area.

In contrast, the plan doesn’t say very much about cycling. There is no mention of any of the issues that we raised, such as the need to treat cyclists as customers who deserve a high level of service from the council.

We also asked the council to focus its transport strategy on reducing traffic. The council, however, doesn’t think that reducing traffic is realistic in Cambridgeshire. In some parts of the county, it says, it may not even be possible to reduce the rate of traffic growth, let alone the amount of traffic. Cambridgeshire, it says, is experiencing development pressures which make the area unsuitable for the two types of traffic reduction target as identified under the traffic reduction acts.

Perhaps the most interesting aspect of the Local Transport Plan is the glimpses it offers of some alternative futures. The County Council has tentatively expressed its interest in participating in a pilot scheme for charging for workplace parking in Cambridge. An example figure given was £5 a week for workplace parking within the inner Cambridge controlled parking zone (i.e. areas that already have residents’ parking or pay and display). Depending on how much the charge was, and how large an area it covered, between £3m and 15m extra per year could be obtained for spending on transport. Examples were given of what this money might be spent on:

If £3-5m per year were available, there could be

If £15m per year were available, this could be spent on

We will doubtless have many ideas of our own on what the revenues from workplace parking charges could be spent on. Any such scheme would be unlikely to start before 2003, so we have plenty of time.