The police can now issue £20 fixed penalty notices to cyclists who ride illegally on pavements. The law hasn’t changed, but it is easier to enforce. For more background information, and why we have supported this change, see Newsletter 17. 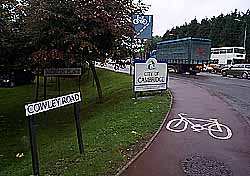 However, our concern is that cyclists using Cambridge’s shared-use paths would have to be psychic to know exactly where many shared-use routes start and end.

One cyclist wrote to Cambridgeshire County Council at the beginning of August asking for clarification of confusing signing in Milton, and on Milton Road. I am told that the reply confirms that even the professionals are not sure about the exact status of some stretches.

Cambridge City Council records should show exactly which stretches of pavement have been designated for shared-use, and so we have requested a complete list, for clarification.

The police have already conducted a high-profile blitz on cyclists ignoring the City-centre cycle ban (though I wonder how effective such a blitz really can be, when it is advertised as ‘for two weeks only’). I wonder if we will ever see similar publicity aimed at motorists parking in cycle lanes and bus lanes?