In my years in traffic research I helped with the monitoring of many experimental schemes, so as Emmanuel Road is near my work and Hills Road is on my cycle commuting trip, I have watched with more than passing interest the effects of recent changes.

My first impressions are generally good. Problems such as a broken down bus in Emmanuel Street and a fire in Zion Baptist Church have given some people the excuse to say the scheme is causing ‘gridlock.’ But the reduction in private cars in the Emmanuel Road area is noticeable, and I am told some of the bus services are more reliable.

My main concern is that although County engineers have done a good job, much of the benefit may be lost if regulations are not enforced. After giving the scheme a week to settle down, on 7-9 September I took photos and notes on my trips to and from work and at some other locations.

Hills Road bus and cycle lane was free from illegally stopped vehicles on only one morning. This has a loading and unloading ban in the morning and evening peak. The same Co-op vehicle was stopped at 17.30 on two days! I have yet to see a traffic warden or policeman in this area between 08.00 and 09.00. The illegal stopping of vehicles in this area creates great danger for the large number of cyclists using this route, as we have to force our way out into the main traffic stream.

On one evening at 17.20 in East Road I watched for 20 minutes as vehicle after vehicle stopped in the single carriageway section where waiting is prohibited until 18.30. A taxi stopped and waited while his fare ordered and collected his ‘take-away’. A builders van stopped in the middle of the road while a ‘SLIM’ person disgorged. During this time some 70 cyclists had to take evasive action and force their way into a stream of cars, these cars in turn having to cross the centre line and disturb the flow towards Parker’s Piece. The ‘Urban Clearway’ is yet to be marked in this area, but it will be equally ineffective unless enforced. 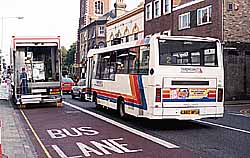 Both the above cases significantly reduce the capacity of vital links in the city’s network as well as making life dangerous for vulnerable road users. As explained in ‘An Economic Case for Better Cycleways’ (Newsletter 18) a small obstruction to flow on a critical link can easily cost the community hundreds of pounds in accumulated delays and prevent buses running to timetable.

In Downing Street the provision of a cycle lane with solid line and advanced stop line should make life easier for the many cyclists who turn left or right into St Andrews Street. Building works are causing problems in this area, but even when flow is not obstructed, one class of driver who should know better is constantly ignoring the cycle lane. On two evenings I watched at just after 17.00 when queues form in this area. Taxis, who are still permitted to turn left, use the cycle lane to avoid joining the queue of right turners. I even observed three in quick succession, each obstructing the free passage of cyclists to the advance stop line. Over the times I observed I lost count of the taxis performing this manoeuvre. I believe there has been an attempt at enforcement here, but no doubt the sight of a uniform will quickly turn taxi drivers into law-abiding citizens.

With minor improvements these schemes could make for ‘Better, Safer and More Cycling’ but only if regulations are enforced. Please, police and traffic wardens, don’t let the ship be spoiled for a ha’porth of tar.