Gordon Plumb has been selling bikes for over twenty years. He doesn’t run a bike shop, though – he is auctioneer for Cambridge Auctions, appointed by the Cambridgeshire police to sell bikes recovered by the police but not claimed after the three months allowed.

Bikes being fairly bulky items, the police are keen to shift them, especially when there are four or five hundred in the cycle store at any one time at Parkside. That’s why there is an auction held every couple of months, and it’s what took me to the car park behind the police station one Saturday, to find out what happens on these occasions.

Quite a few bikes are recovered, of course – not all end up under the auctioneer’s hammer. We could tell from the gaps in the lot numbers that at least three dozen bikes were reunited with their anxious owners in the first three weeks of January, for example.

Regular auctions started in 1977 at the Cattle Market, which saw not only bike sales but also produce, antiques and collectibles. That continued until the site was turned over to the Park & Ride car park, when bike sales moved to Parkside – and sales of other recovered property too from time to time.

It is certainly possible to obtain a bargain at one of these bike auctions – which is perhaps why there are a number of regular customers – but you could end up with a complete dud as well without care. On this particular Saturday there were 107 bikes to sell. The complete wrecks had already been separated out and sent for scrap. The remainder were stacked with their lot numbers around the edge of the car park for an hour’s viewing before the sale.

And then they’re off. Bikes up on the table at the front. Crowd gathered behind. A quick once over to pick up any gross defects and then the bidding begins. Buyers collect a numbered card beforehand and wave it in the air to up the price. Selling at the rate of about one a minute the pile of bikes gradually diminished.

An auction typically raises between one and five thousand pounds, so this day’s was probably a little on the low side of average, though I wasn’t keeping a running tally. Only three bikes didn’t sell at all, though several went for only £1.

The lowest bid was 10p, but since they were only working to multiples of a pound, Mr Plumb actually gave that one away. Customers pay 10% on top of the final bid, which is how the auctioneers make their money – hardly a fortune, given the time involved. The proceeds of the sale go to charities nominated by the police, I was delighted to hear. 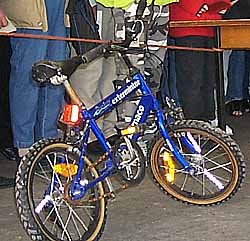 The best bargain, in my opinion, was also the bike which fetched the most in the sale. This was a beautiful plum-coloured ladies Raleigh, almost new and in excellent condition. This sold for £82. The prize for the most inappropriately named bike went to a tiny little child’s cycle ambitiously emblazoned The Exterminator.

One or two bikes had obviously been in the river – complete with dried weeds. Mr Plumb said that a van goes out every day to pick up bikes reported found – in people’s gardens for example. The brook behind big Sainsbury’s is a favourite dumping spot.

What happens, l wondered, if someone spots their bike on the street after it has been sold? ‘The fall of the hammer means a sale,’ Plumb said, ‘so legally it becomes their property, and our receipt authorises this.’ So an attempt to take the bike back afterwards would be theft.

So as the morning went on, and the crowd got smaller, there was a steady stream of people carrying, wheeling and occasionally riding away their new steeds. I wonder how many of the bikes will go under the same hammer again in the future?