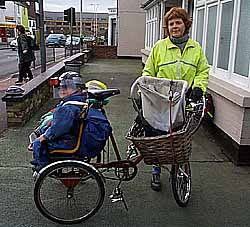 One Saturday evening last December, local youths decided that they would like to joyride on a ladies’ Pashley tricycle. They did not consider the value of the tricycle to the owners: this had been their main means of commuting with two young children. The thieves also did not anticipate the determination of the owners to retrieve the trike and the speed at which newspaper articles and local adverts would publicise the crime. This rapid response was principally down to the fact that Clare Macrae had on file a picture of the trike, fully laden. She delivered the story to the Cambridge Evening News within hours of being contacted. Posters informed residents in the area of the theft and within a couple of days the trike was recovered. Unfortunately the vandals had wrecked the machine and it was a write-off. So many accessories had been removed it was beyond belief that anyone could be bothered to undo that many nuts, bolts, screws etc. Not to mention that the beloved machine spent several days in the Cam before it was extracted with the aid of grappling hooks. Essentially everything that could be bent had been: from eye witnesses we understand that at least four youths had been riding on it at a time. Why?

We would like to thank Clare for her incredible help in this matter and other friends within Cambridge for their response; they knew the value of one old eccentric machine. It came very close to being replaced with a gleaming new 3-speed Pashley. However, we are now the owners of a bicycle trailer. We hope in time to report to the Campaign what percentage of the cycle routes within the city is accessible to this 0.66 m wide environmentally friendly machine that we initially judged to be the ultimate means of carrying two small children.