Last year’s Transport White Paper has led to a change in the way councils apply to central government for transport funding. Future funding bids must now define a five-year strategy, allowing councils to plan further ahead and making more ambitious projects possible. However, because of the short time scale, and the large amount of work involved, the first ‘Local Transport Plans’, to be submitted in July 1999, will be provisional (albeit still covering five years). These will be followed in July 2000 by submission of a statutory plan.

We were optimistic when we saw the Government’s draft guidance in November last year:

Local authorities will need actively to involve local people… at an early stage in drawing up their Plans. This wider participation will be a key factor in raising travel awareness…

Cambridgeshire County Council’s consultation took the form of a four-page leaflet, and questionnaire, which listed the Council’s current activities, divided mainly by current budget categories. Readers were asked to divide up a notional £10 budget in £1 chunks, and indicate their level of support for road-user-charging, workplace parking charges, and various possible targets for reducing traffic levels or traffic growth.

The County Council invited individuals to fill in the questionnaire, by placing it on their web site. We took the opportunity to send copies to all our members. Thank you to all who responded. 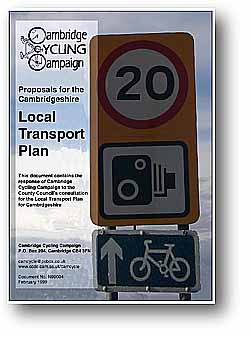 Promoting cycling. We said we were concerned that the council doesn’t seem to appreciate the extent to which cycling can contribute to traffic reduction. Cycling is a very cost-effective means of reducing traffic, but only the Cycle Friendly Employers scheme really promotes this locally. We asked for cyclists to be considered as customers. Considerable time and money is directed at discovering what motorists want from Park and Ride. We asked for the same to be done to give cyclists – in the jargon – a higher ‘level of service’.

We said that levels of cycling could be increased greatly, by dealing with places where cyclists feel vulnerable, such as big roundabouts, and by opening up new corridors to cycling.

Safety. We said that safety needs a re-think locally. Cycling seems to be perceived as just a safety problem, and there is rarely any suggestion that changes should be made to improve convenience as a way to encourage cycling. (The recent cattle grids are a welcome exception to this.) We asked for more speed reduction and enforcement, for consideration of home zones, for more cycle-friendly traffic calming, reduction in pollution, and safer routes to schools.

Integration. We asked the council to integrate its thinking across departments, and budgets, for example by treating geographical areas. This is in contrast to the recent experience of following the Newmarket Road bus measures with a separate cycle study.

Park and Ride. We said that the supply of central parking needed to be reduced for Park and Ride to begin to achieve traffic reduction. We feel very strongly that Park and Ride is not the whole answer, and needs reviewing. At considerable expense, it provides car-owners with a subsidised bus service for a short part of their journey. The present system does nothing to reduce car journeys outside the urban area or to promote wider use of buses. Indeed, it may encourage journeys by car which would otherwise have been made entirely on public transport. We asked for more, smaller and dispersed sites, which would also improve bus services to non-car drivers.

Our full report is available (in PDF format) on our Web site, and on the Saturday stall. 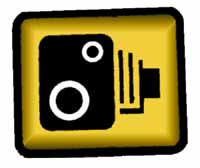 The County Council’s Environment and Transport Committee met on 18 March to consider a draft Contents page for the Cambridgeshire Transport Plan. (Remember that we were told that groups such as ourselves would not be involved until April or May – too late to have a significant effect on the Plan.)

The impression we got from the Officers’ report to committee was one of ‘business as usual’. We were disappointed to find that essentially none of the effort we put into making constructive input was reflected. We know that other groups also made wide-ranging responses. Councillors could be forgiven for thinking, from this report, that all groups did was to fill in the questionnaire.

Worse still, the draft Contents page placed cycling under the heading ‘Cycling and Walking’ at the end of the Public Transport section! We asked the committee to recognise that walking and cycling were in fact different, and not forms of public transport. We understand that they did so. Thank you.

We asked the County for a meeting of local transport groups and council officers to discuss the Local Transport Plan. When they declined, saying that Councillors had already decided that such meetings would be held in April or May, we decided to organise our own meeting instead.

On Local Transport Day (Saturday 6 March), representatives of Cambridge Cycling Campaign, Cambridge Friends of the Earth, Cambridgeshire CPRE, CTC (Cyclists’ Touring Club), Fen Line Users Association, Railway Development Society and Transport 2000 met. We exchanged ideas, found much common ground, and decided to form a new umbrella organisation, the Cambridgeshire Transport Forum. We have begun by asking the County Council to set up an Integrated Transport Round Table, involving local interest groups, senior County Councillors and Officers, to foster greater participation in the Local Transport Plan process. We’ll have more news of the Forum, and hopefully also of the Round Table, another time.