One of the less publicised aspects of Gordon Brown’s recent Budget was that it actually mentioned cycling. We think this is probably the first time this has happened.

The Budget contained a number of extremely tentative steps to support the Government’s Integrated Transport policy. The most widely discussed is, of course, the increased tax on petrol, and the media has clearly decided this is a Bad Thing. It was also no surprise.

A longstanding principle of the tax system is that the journey to work is a personal one, not part of someone’s business activities. This means that employers who pay for or subsidise some aspect of travel to or from work are making a payment in kind, an addition to salary, which is therefore liable to tax. The Treasury does not break this precedent lightly, though company cars have always had a hidden subsidy for those who can use them for personal journeys including to and from work.

The three tax changes directly related to bicycles are (from this April):

Even though the amounts are not large, the principle has been established. When doing jury service recently, I was able to claim £6 for using my bike – enough to pay my Cycling Campaign membership! 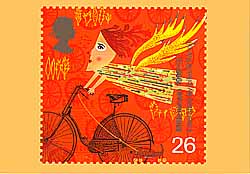 The Budget also exempted workplace cycle parking from tax, in advance of the possible introduction of charges envisaged by the Integrated Transport White Paper. Realistically, workplace parking taxes on cars will be the really big change that will both promote alternatives and fund them. And this hasn’t yet been legislated for.

More generally in the Budget, employers can now provide bus services, either themselves or by a general subsidy to the operator, without making employees liable for tax, but they can’t directly subsidise fares for employees. Nor will back-up travel arrangements (such as employer-paid taxi fares) to cover for breakdowns in a car-sharing arrangement or occasional late-night journeys be liable for tax. Apparently season ticket loans are already exempt from tax.