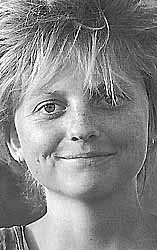 Readers of London Cycling Campaign’s magazine might be familiar with cycling chef and writer Josie Dew, through her entertaining – and occasionally suspenseful – column ‘BackPedalling’. She is also the author of two delightful books on her incredible adventures by bike:

I read Travels in a Strange State cover-to-cover this summer, having just returned from a two week holiday over there. I was immediately transported back to my own travels, with a delightful account of trying get a drink – of water, wart-her, waah-der, clear stuff. The blurb gives a wonderful picture of the book about her ride around Hawaii, and then from California to Halifax, Nova Scotia: 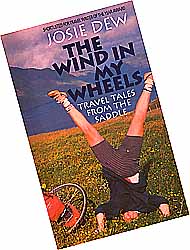 By most people’s standards, Josie Dew is hugely adventurous. By American standards, she is completely insane. For Americans drive everywhere: through cinemas, restaurants, even trees. But driving past Josie as she pedalled across America was a new and alarming experience.

On her eight-month journey Josie experienced it all; race riots in Los Angeles, impossible heat in Death Valley, Sexual Tantric Seminars in Hawaii. From Utah to the Great Lakes, via improbable places like Zzyzx and Squaw Tit, her two-wheeled odyssey brought her into contact with all the wonders and worries of this larger-than-life country.

Highly entertaining, richly informative, Travels in a Strange State is a personal memoir of an improbable journey, revealing the United States as it is rarely seen – from the seat of a bicycle.

We invited Josie to give a talk in Cambridge. Fortuitously, it happens that she’s launching a new book A Ride in the Neon Sun – A Gaijin in Japan in April, and so we asked her publisher to arrange a slide show at Waterstone’s in Bridge Street, Cambridge. Josie’s talks come very highly recommended by those who’ve seen and heard them, so be sure to make a note in your diary now! Tuesday 20 April (not the originally advertised Thursday 22 April), 6.30 pm.