The National Cycling Strategy said that guidelines should be developed for Cycle Audit and Cycle Review. The Institute of Highways and Transportation has now published these, with the full backing of the Department of Environment, Transport and the Regions. The authors are David Davies, a well known cycle activist who now runs a transport consultancy business, and Mike Sharpe, Cambridgeshire’s former Director of Transportation. Perhaps the authors chuckle a little to themselves in naming the form provided for the review process ‘CRP.’ Does this describe the state of the road environment for cyclists?

The book is dry reading, but that is not the point. The idea is to provide a way of objectively measuring the cycle-friendliness of the road environment. Cycle Audit is applied to planned changes to the transport network. It tries ‘to ensure that opportunities to encourage cycling are considered comprehensively and that cycling conditions are not inadvertently made worse’. In contrast, Cycle Review looks at the existing network ‘to assess ways in which those networks could be changed in order to encourage cycling’. Both emphasise convenience as well as safety. 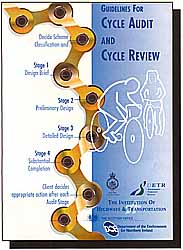 Cycle Audit provides a four-stage ‘recipe’ for evaluating the impact of traffic scheme proposals on cyclists. This is intended to cover all developments, not just those aimed specifically at cyclists. Like existing safety audit procedures, the job should be done by someone independent of each scheme’s designer. By formally introducing the process at various stages of development it is hoped that design flaws will be picked up before there is too much investment in a scheme – and too much emotional attachment to a design. In the longer term, design standards should be improved.

Cycle Review, on the other hand, is a way of looking systematically at the existing roads, scoring them on their cycle-friendliness. In this way, councils can make informed investment decisions based on priorities arrived at by asking the right questions, rather than a ‘finger in the air’, gut-feeling approach.

In fact, Cambridgeshire County Council already operates a kind of review – it has a form for scoring facilities thought to be in need of improvement and it has recently extended this to include roads where there are no facilities at all. The County Council does not, however, have any formal mechanism for auditing proposals. As a result we have seen damaging schemes such as road narrowings and the removal of the vehicle Give Way at the Quy A14 roundabout.

Both audit and review leave an ‘audit trail’. One of the central tenets of ‘quality management’ is that there should be a documented and controlled path for arriving at a decision, and that this can be examined after the event. The later stages of both processes prompt gathering of information such as traffic flow, actual traffic speeds, accident rates and so on. Scores are then assigned to these to arrive at a ‘level of service’ from A to F, where A is very cycle-friendly and F is exceedingly unfriendly.

From our point of view, the main benefits are twofold.

Firstly, if implemented, it means that the right questions are asked. The process is based on the ‘hierarchy’ of ways of providing for cyclists which is now part of national guidance. This says that traffic reduction, reducing traffic speeds, traffic calming, junction improvements and redistribution of the carriageway should be looked at, in that order, to improve conditions for cyclists. Only when none of these are possible should off-road facilities be considered. Therefore the first stages of the audit process ask whether each of these items has been considered and insist on an explanation if it is not used.

Secondly, it gives us a recognised tool which we can use ourselves to back up concerns about schemes being proposed by the Council. It will be instructive to apply the process to the new Barton Road cycleway, for example. My feeling is that it would not score very highly since there are negative scores for things like frequent driveways and for loss of priority at side roads. It may also be useful to say to councillors, ‘Look, you’re proposing this scheme in Milton which national guidelines show coming in at next to bottom for level of service to cyclists – why are you wasting our money on it?’

The challenge now is to persuade the Councils, especially the County, to adopt the guidelines. The indications are not good. Both audit and review are labour-intensive. Council officers are hard pressed already. Officers’ and contractors’ time is also money, though perhaps slightly less obviously than tarmac and signs are. We would argue that it can save money being spent on poorly justified schemes. We were also told that the lack of a similar process for pedestrians might mean not adopting the cycle process. What a shame that we should see nothing done simply because you can’t do everything.

Edinburgh already operates a systematic audit. While the new guidelines offer a very useful tool, we can’t help feeling that there is something very simple and direct about Edinburgh’s equivalent. I think that this stems from Edinburgh’s secure feeling that they know what makes good cycling provision. Here in Cambridgeshire I don’t think there is this agreement.