When I realised that my brake blocks were wearing down, I started looking for a class where I could learn the secret, magic way of replacing them. Then the Campaign distributed a leaflet advertising David Green’s course at Coleridge Community College, so I enrolled, not realising my luck as it’s currently the only such course in Cambridge. 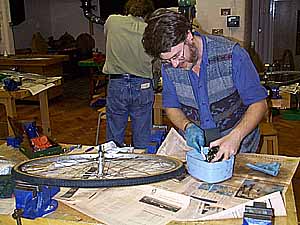 This is the first time David has given the course, which shows a little bit (I believe he thought we might progress a bit faster than we are), but he is a good teacher – he even copes with me and I’m not the world’s best student. The number of pupils is strictly limited, and I think he got the number about right. We still have to work in pairs, but I can’t see any way around that (I only grumble because I’m not very good at it).

Since we’re working on our own bikes, what we learn is immediately useful. The approach is perhaps a little old-fashioned (liquid paraffin as a solvent and oil for lubricating chains) but it’s very pragmatic and makes sense.

Are the lessons worthwhile? Yes, definitely. Right from the first I was learning new confidence in working on my bike. We’re doing things I would never have dared do, such as maintaining hubs, and bottom brackets are slated for a later lesson. With more practice by myself, I think I might even be reasonably good at it.

Oh, and did I learn the secret, magic way of replacing brake blocks? Well, no, but I can now do it the normal slow, fiddly way, which is good enough.