We have written to the organisers of Cambridge Folk Festival, asking for temporary cycle parking to be provided next year, along the lines of the scaffolding we use at the cyclists’ breakfast each year.

Marks and Spencer’s Food and Wine Department in Cambridge has recently launched a home-delivery service. A £5 fee gets your food delivered anywhere within a 5-mile radius. (There is a sliding price scale depending on the amount you have spent.) You nominate a two hour time-slot in which the food will arrive. Robert Sayle also runs a long-established free delivery service. These are welcome services for those who don’t drive in Cambridge.

New parking restrictions in Cambridge city centre came into force on October 19. Car parking is now prohibited at all times within the pedestrian zone streets, with some exceptions. My first version of this snippet remarked that there were still plenty of parked cars. However, I have just heard that for the first two weeks, cars were being leafleted, to explain the new restrictions. There have also been discussions with traders about enforcement. And only now are tickets being issued. I am impressed.

We ran a Cycling Campaign stall at the student environmental fair One World Squash. Apparently the free alcohol attracted a lot more attention than the stalls.

This will be the third issue of our Newsletter on sale in Waterstone’s in Bridge Street. Thank you to Waterstone’s for supporting a local organisation this way. It’s great publicity for us to be in amongst all the national cycling magazines. We would like to see the newsletter on sale more widely still. Any suggestions?

We have heard on the grapevine that the County Council has appointed a Bus Campaigner. How about a Cycle Campaigner?

The County’s Environment and Transport Committee recently decided that ‘concern be expressed to Government about the withdrawal of the scheme to widen the A14 between Cambridge and Huntingdon and consequently Officers work with others locally to press for early commencement of and involvement in the A14 corridor study to be commissioned by DETR, in order to secure the earliest resolution of the unacceptably high level of congestion on this route.’ The purpose of the so-called ‘multi-modal corridor study’ is to examine the potential benefits of all possible modes of transport along the entire corridor. Thus, for example, public transport along the old St Ives line will be considered. It is not simply a way to get the A14 widened. I trust that, despite this motion, the study will get fair treatment locally. We will seek to be involved in the process, to put the cycling point of view.

The County Council has been contacting all schools, to expand the Safer Routes to School project. This is ‘designed to discourage unnecessary car journeys by encouraging parents to walk or cycle with their children to school, increasing the children’s health, fitness and independence.’ There is plenty of scope to reduce congestion this way. 51% of those travelling to school by car live less than one mile from school. 34% of parents who drive their children to school go straight back home. 54% of children currently travelling to school by car said that, given the choice, they would rather cycle to school.

We have heard that this year’s Fen Cycle Package (a bid for Government funds to develop a cycle network in the Fens) will fail. This will be the second year that funding will be refused, for reasons I don’t quite understand. But it seems that the County Council has been treated unfairly on this matter twice now. 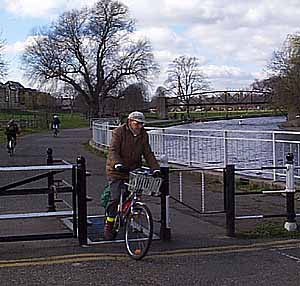 Cambridge City Council has allocated £10 000 to minor cycling works this year, in addition to the general budget which is going into the big schemes in sequence (like Barton Road, which is taking up this whole budget for a couple of years). Because we expressed deserved enthusiasm for Midsummer Common’s cattle grids, it is likely that most of this new money will be spent on replacing four of the pinch stiles or gates with grids. There should be a little money to go on some cycle parking too – and we have asked for the south end of Regent Street to be first in line there.

The County Council recently unveiled a new aerial photograph survey of the county. Photos will be on display in Heffers and the new survey will be available for sale both as prints and in digital form for computer use.

Early results from the Travel for Work surveys look very interesting. Full results should be out just as this Newsletter goes to the printers, so we hope to have a full report next time.

At the Trinity Forum’s recent discussion on the Integrated Transport White Paper, the County’s Director of Environment and Transport stated that there is now an acceptance that shared use has failed, and no more will be created. Strange. Shared use is still very much on the cards in Milton.

My favourite typo of the month: seen in a letter about planning: Correction: Phase 1b, line 1: ‘Hoses’ should read ‘Houses’.