A new book by Nicola Baird

Nicola Baird’s book is accurately subtitled Who’s Driving Car Culture? It is written in a highly journalistic style, with a mass of facts, anecdotes, interviews and humorous side-turnings all about society’s love affair with the car, and its consequences. 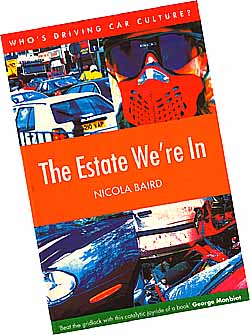 The book follows through the idea that a car is not simply about getting from A to B. Baird examines the advertising culture that promotes sex, speed, status and safety. Safety for the occupants, that is. In 1997, Ford spent well over £72 million on advertising. Around 12% of TV advertising is for cars. In 1995-6 Rover Group spent £42.9 million on advertising compared with £18,000 by Stagecoach on rail, £9 million by Eurostar – and £83,000 by Friends of the Earth.

Baird quotes research which shows that `12 percent of Britons actually spend more time in their car than they do with their family’. She goes on to say `Twenty years ago Ivan Illich’s classic book Energy and Equity graphically pointed out that drivers’ refusal to do their sums explained why industrial societies stayed wedded to their cars: the typical American devotes 30 hours a week to his car.’

The book looks at some of the alternatives to the car, and people’s experiences of them. It’s a bit light on cycling. Colin Graham of the CTC is quoted as saying: `we want to move away from this populist view that what cyclists want is off-road provision’ We know that most journeys are under five miles, ideal for cycling, and we already have a road network which is door-to-door.’

The book looks at some of the protests and actions that have surrounded the car – and is bang up to date. Reclaim the Streets demos, Twyford Down and Newbury are all familiar. Less well known actions get a look in, like the Brighton group so fed up with pavement parking that they took direct action by moving the vehicles. Trouble is, the police weren’t in the least interested in the drivers’ offences, only in the people who tried to do something about them.

The first chapter, Cars R Us, sets the tone: `this book does not blame car drivers for the state we’re in. After all, anyone in a vehicle can be driven mad, every day, by the traffic `we all want to drive, we all have a right to drive: and that’s the problem.’ In among the seriousness of pollution statistics and how Oxford has managed to stabilise traffic levels for 20 years, Nicola Baird takes us behind the scenes with an AA patrol. `”The weather predicts our workload” explains Frank. Everyone has an AA story: people in full wedding gear… and people who’ve been willing to tamper with their car so it breaks down on the long haul from Scotland to get a tow back to their home.’

The light-hearted style makes The Estate We’re In an easy read, but one in which the indictment of car culture shines through. And it contains lots of very useful sound bites which you may just see again in these pages in times to come.