If you’ve been in town on recent Saturdays you’ll know that it has been hard to get past the excavations in progress at the King’s Parade end of Trinity Street, an area officially known as Senate House Hill. Whose sense of humour was it in days gone by that gave it this name?

We were a little alarmed when we recently received notification of the closure of King’s Parade for all of the first quarter of next year, so we sought the true story. King’s Parade probably carries one of the highest concentrations of cyclists of any street in the country, and that in five minutes every hour as lectures finish. 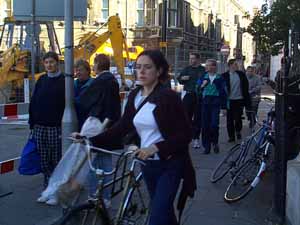 In fact the digging, which we expected for street remodelling next year, will be done section by section. Cyclists will probably have to walk past these, at least if the density of pedestrians is as high as it was on the Saturday I was there. The closure order is just a catch-all formality to allow the work to be done.

It is complicated by the need to replace water mains there. This is what is happening at the moment. The works will happen in three ‘waves’ moving south down King’s Parade. When Senate House Hill is initially completed, which it should be by the time you read this, the road will be dug up in sections past King’s College. After it passes Great St Mary’s Church, the bus bollards and bike route will be replaced with something more like the arrangement agreed for the street remodelling, with bikes travelling either side of the buses.

Once complete, the water works will start all over again at Senate House Hill, around the end of the year. They will go back again down King’s Parade. Permanent bollards will be installed. Finally, after the exam period is over, the pavement widening and resurfacing of the street will be done. Everything should be finished by early summer 1999.

An interesting side-effect of the current works is that Trinity Street and Green Street have temporarily been made two-way. There is no evidence of this on the ground, though. The Council is not anxious to publicise this, but for motor vehicles there is no other way out. Market Hill (another of those little pimples) is also two-way for the time being, but controlled by traffic lights. Green Street in particular should, in our opinion, be two-way for cyclists anyway.

It has to be considered truly amazing that on this occasion digging up the street to lay water mains is happening before the street is completely and expensively resurfaced.