Regent Terrace is the little street that runs from the Pizza Hut on Regent Street alongside Parker’s Piece up to Gonville Place. It is significant for cyclists because it forms the first quarter mile of the ‘Cambridge South East Cycle Route.’ More cyclists probably cross Parker’s Piece diagonally than use Regent Terrace, but it is still a busy cycle route, with purpose-built cycle crossings at both ends.

At the ‘what’s on your mind’ session at our August monthly meeting, the condition of the surface on Regent Terrace was raised, and that prompted a sad enumeration of lots of other faults in this street. This in turn prompted a long letter of woe to the County Council, reflecting the anguish of members stored up for many years. 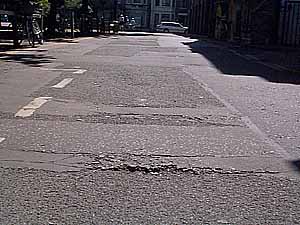 Mainly, we said it needed resurfacing. It’s not that it is badly pot-holed, though there are some holes. So it isn’t appropriate to just report it to the pothole phone line. No, it is more that it has been patched and dug up, and gouged and pitted so many times that it is one of the bumpiest streets in Cambridge. Only properly resurfacing the whole road could make it pleasant to cycle on.

Then there’s the question of the bollards at the Pizza Hut. In a desperate effort to stop cyclists going through the pedestrian bit, bollards were installed close together. This, of course, means that most pedestrians don’t use the pedestrian bit either, because there isn’t really room. It’s not just people with pushchairs and large bags. More unencumbered people use the bike path than the footpath. And as a result many pedestrians also cross the road mixed in with the bikes at the cycle crossing section. 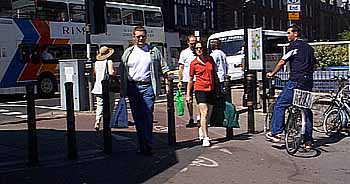 Observing there with a camera for a few minutes, very common behaviour was for one of a pair of people walking side by side to use the bike gap while their neighbour squeezed though the pedestrian gap alongside. Let’s just remove most of the deliberately obstructive bollards, we said. Who cares if a few bikes go the wrong side – everyone’s going through a common gap as it stands at present anyway!

Other gripes are that pedestrians walk many abreast along the length of Regent Terrace and are often reluctant to move out of the way for a bike to pass. This is exacerbated by the parking, which is allowed along the whole length of the road (though it is restricted to residents during the day). At night the lighting is significantly inferior to adjacent streets.

Finally, where the cycle track across the south-west corner of Parker’s Piece joins Regent Terrace, it is common for cars to park at least right up to the gap, and often partially if not completely blocking it. There is only a single yellow line here, and enforcement is rare. Of course it’s only a cycle track, so obviously it is fair game for motorists to park on.

We haven’t had a reply from the County Council at the time of writing this. However, we do know that they have allocated a significant sum to resurfacing recently, but directed it at major roads. We’d like to see some small part of that put into what is a major road for cyclists.