Apparently the best that can be done for cyclists in Milton is absurdly narrow cycle lanes or cycling on the pavement.

Plans have now been developed for two options for cyclists in Milton, along Cambridge Road, High Street and Ely Road – three names for the old main road through the centre of the village. The County Council organised a small exhibition about them at the Milton Community Centre and is distributing publicity material locally. One option proposes narrow cycle lanes on the road – only a metre wide. The other option envisages allowing cyclists to ride on the eastern footway, which would be reconstructed to a width of two metres. As well as suffering from the usual failings of shared-use – driveways, pedestrians and cyclists mixing in a built-up area, and inadequate width – there are several side turnings and the path meanders around a lay-by or two. 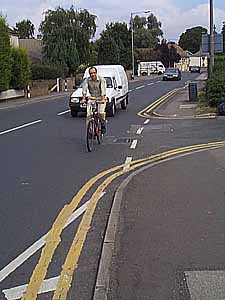 The worst feature of both schemes – if you think that either has much to redeem it – is that just where it gets busy and complicated around the shops, both options just end, and restart the other side. In the case of on-road lanes, at least you are in the correct place on the road. But with the shared-use footway, in theory you would have to cross the road twice in a matter of a hundred metres or so if heading north. In practice, of course, people who feel compelled to cycle on the pavement will just ignore the signs and cycle illegally past the shops. Crossing the road must surely be less safe than cycling along it.

But just what is the £50,000 – £90,000 they expect to spend on the scheme trying to solve? The problem perceived by many Milton cyclists is the so-called traffic-calming installed last year. Three islands were installed in the middle of the street about two years ago. We reported on these in previous issues. The idea is to slow the traffic, but they are just the wrong width – too wide to prevent a car trying to overtake a bike in the gap, and too narrow to do so safely. Both of the visitors to the exhibition at the same time we were there made exactly this point. We told the County Council the same last year. As a result some red surfacing was installed, but that really only papered over the cracks. The fundamental problem of cyclists being squeezed did not go away.

Frankly, both options are very poor value for money. In our opinion they give a false illusion of safety, inconvenience cyclists and generally do cycling a disservice. A much better way to spend the money would be to install more effective and more cycle-friendly traffic calming. Or just take the islands out – Milton High Street isn’t a particularly awkward or difficult street to cycle in the first place.