When I saw that strange light I thought at first that I had been working too hard. I was on my way home from shopping, panniers filled, when my eye was caught by an unexpected green glow in front of me. What was happening? Were all those long evenings writing position papers and Cycling Campaign reports causing me to see bicycles where there were none? In fact I was so startled I had to go back and take another look to make sure I was not dreaming. But no, there it was. A lovely little green bicycle, shining ever so prettily! (Why do they always face the same way? I wondered. And why always a ‘man’s’ bike, not a ‘woman’s’?). 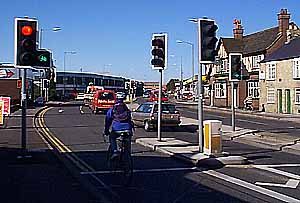 I realised with joy that I no longer needed to fear the watching eyes of the law. After all those long months inhabiting that shadowy region between darkness and righteousness, I had been made an honest man. No longer, when riding homewards along Newmarket Road, need I stop at the bus signals just before River Lane. I could glide fearlessly past, that little green filter light exempting me magnificently from the need to obey the red light. Why did they change their mind? We may never know. But the council has relented. They’ve put in a cycle filter. At last.

But not all such good news: still the lights at Ditton Lane don’t detect bikes, and still the cycle lane hasn’t been re-instated approaching the railway bridge westbound on Newmarket Road. This is despite four letters to the Council and promises that this would be done. Sigh.