I was going to write about this Festival of Bikes, but I must mention the train journey first. I don’t mind the train so much these days since I’ve discovered the timetable information available over the Internet on http://www.railtrack.co.uk. I roughed up several itineraries and took Friday afternoon off. Leaving at 14:05, I was due in Lancaster at 19:01 but I got there two hours late. I’d confirmed my train times before leaving and even got a price of £58.10, but at the station I had to pay £67.60. Still I persevered. The train from Cambridge kept time right up to Birmingham New Street where at rush hour the train was so crammed that our departure was delayed by 50 minutes. So we rolled into Stafford ten minutes after my connection was due to leave.

Anyway I didn’t need to worry, as my connection was about half an hour late due to technical problems at Banbury. I could catch another train that would get me to Preston in 60 minutes because it wasn’t making the usual stops at Wigan, Bolton etc. due to engineering works in the Manchester area. Good! but although this got it into Preston early it would then have to wait 50 minutes before leaving at its usual time.

When I got to Preston, there were scenes that I’d never seen before at a UK railway station. Platform 6 was packed, something like the black-and-white films of wartime evacuations. It was chaos! News was just coming in about trouble at Lockerbie, adverse weather conditions or something. We pondered. Midsummer, early evening, what could it be? Snow? Rain? Leaves? It turned out that serious flash floods had washed the line away.

During the next hour, I got on and off four stationary trains. On one, destined for Glasgow, I sat next to a group of Scotsmen around a table of empty drink cans. One was effing and blinding the whole time, and I felt embarrassed for the young mother, child perched on her lap, trying to ignore the strong language. I exchanged awkward glances with my fellow passengers opposite, and tried to hide the copy of the Transport White Paper I was reading. Ultimately I arrived in Lancaster on a coach, but I really must tell you about the bike festival.

I arrived in time to catch the end of Sir Alex Moulton’s talk in which he slammed tricycle recumbents as ‘a can of worms’ saying ‘I won’t touch them’. He seemed to think that electric power assistance is good, particularly as there is a finite amount of power in the human body ‘unless you take a lot of drugs’. He was very warmly received, as befits the grand old man of cycle design.

Next day there was a trade show and delegates showing off their bikes. It was just fine to stand out of doors in the sunshine admiring the bikes, and of course asking for a go. There were a lot of low tricycles, including a couple of Windcheetahs which many aficionados were drooling over. There was an amazing number of Bromptons dotted around, a bit like snails curled up into corners. I had a go on many of the bikes. I tried a Roadhog, owned by the mother of its designer; this is a long luxurious recumbent, with a fully supporting back rest. The handlebars curl in front of your sit-up position and offer 63 gears (3x3x7)! She told me that having hub and derailleur gives her the option of switching gears whether she’s moving or stationary. I boggle at what must have to go through your head if you want to switch from gear 43 to 42. I take it for a ride and it’s fine, a bit like my bikeE but it felt bigger, more protected and I didn’t feel the need to go fast. I tried to chase a fully faired racer downhill but it cranked off at breathtaking speed. It looked like a big piece of white paper blowing away in the wind, and was an alarming sight for the motorists, who have to decide if there’s a human being inside. I fiercely tried to keep up but he was over the brow of the next hill in no time. 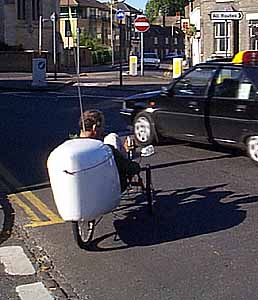 I returned defeated to try out some more bikes. The lightest bike I tried was also a folder. Cleverly designed, the back wheel pivots around the bottom bracket so the chain doesn’t slacken during folding. Obvious, but the designer had to have that part specially engineered. It was only a one-off experiment, but it felt sturdy and stout to ride. The hub is clever, from an old Moulton apparently, with two gears, changed by back-pedalling slightly. You can tell which gear you’re in because the clicking noise is different! To brake, pedal backwards, and so there are no cables whatsoever – neat!

A trade show filled a hall with an assortment of recumbents, trailers, and spares suppliers, but it was a boat bike that caught my imagination. From a back pack emerged some shiny metal supports, two bright yellow floats, a propeller shaft and power unit. The supports slotted into brackets pre-mounted on a normal bike frame, and the power unit was like a dynamo set up to brush against the back wheel. An adaptor fitted to the propeller turned out to be a pump, and the demonstrator mounted the bike and started pedalling furiously. This inflated the floats after about 20 minutes. We took the boat/bike down to the Lancaster Canal early on Saturday evening. It was surprisingly stable and reasonably fast and agile on the water. Drinkers at a canal-side pub were so impressed that quite a few of them had a go, and none fell in.

Sunday was my last day at the show, and the day I most regretted not taking a bike. There was a ride down to Morecambe and a parade of bikes on the promenade. It was tremendous to see so many different sorts of bike mixed up with the promenaders. I ducked into the Art Deco Midland Hotel for a reprieve, and found the best-value pot of tea in town. I left Morecambe with the memory of a group in recumbent tricycles watching a competition for street performers.

Back at Lancaster I had a chance to ride a high wheeler (penny farthing) and what a frightening experience it was. Made in the days when folk were used to riding horses, this is a challenge to get on and needs a leap of faith to get off. On board, don’t look down, don’t pull on the handlebars, and don’t brake unless you want to head-butt the ground. Despite these difficulties the queue to try the bike out remained all afternoon. The college filled with people on unusual bikes. There was a group learning to ride tall unicycles, and a constant stream of recumbents, tricycles and trailer bikes.

Cyclefest is unpublicised, and runs on the basis that ‘those who want to will find out about it’. Delegates clearly knew each other well and there was a family feel to the event. The next ‘fest is in 2000. All my train connections back to Cambridge were on time.