This article is a plea for better understanding between cyclists and all pedestrians, especially blind or partially sighted ones. I realise that I am probably preaching to the converted: Cambridge Cycling Campaign members are in any case among the most responsible cyclists and may think that my comments do not apply to them, but please read them anyway.

Cyclists and blind pedestrians often have trouble recognising each other, especially since these days visually impaired people often carry their white canes folded up or hidden for fear of being mugged. We shouldn’t assume that, because there is no white stick to be seen, the person we are approaching has perfect sight and hearing, or is aware of our approach at all.

Many visually impaired people live alone and have to go out alone. Many are elderly. More and more often recently they have been telling me how frightened they are to step outside their own home for fear of cyclists on the pavements. People with visual impairments want and strive to be as independent as possible and it is simply not fair that this vulnerable group of people should be imprisoned at home, or penalised financially by being forced to go everywhere by taxi, for fear of collisions with bikes whose riders are often acting illegally by cycling on pavements not marked for shared use.

Cyclists meeting a pedestrian on a footpath often pass very close, perhaps because the footpath is narrow or there are overhanging shrubs, and they may be cycling quite fast. Their approach may be unheard due to other traffic noise, and as they pass, the unexpected draught created, or the brushing of clothing, can be terrifying to a pedestrian and can disorientate a totally blind person to the degree that they completely change direction without realising and get lost on a familiar road. If the cyclist rings a bell or gives other warning of approach, even if the pedestrian already seems to have noticed him or her, the shock of meeting will be lessened. 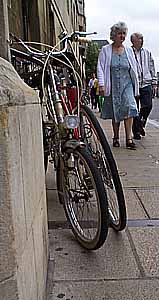 Blind or partially sighted people may be unaware that a particular pavement is shared-use. They may not be able to see or feel the dividing line even if there is one. So cyclists who are completely in the right place may nevertheless be confronted by a pedestrian who is in the wrong place, but does not know it. Even when a shared-use path is marked at both ends with the appropriate tactile paving and has a slightly raised centre divider, it is still possible for a blind person to wander out of the correct lane without realising. Of course, cyclists do this too, but they can correct their actions.

At traffic lights a waiting blind person may hear that motor traffic has stopped and so may step into the carriageway to cross without realising that a cyclist has not stopped. Living in town I often see bikes ignoring red lights, or setting off before their light has turned green. Please be aware that the pedestrian in the road may need your help, not your abuse.

At marked crossings and dropped kerbs those lumpy paving stones (usually red or yellow, officially named tactile paving) are intended to help people who can’t see to locate the control box to stop traffic flow, and also to warn them that they are about to step out into traffic. Tactile paving is supposed to be installed at every dropped kerb but it is doubtful that it will be, although the situation is improving. Without tactile paving (which is in any case hard to feel through the soles of winter shoes), a blind person may not be able to differentiate a dropped kerb from the usual bumps in the pavement and so may step unexpectedly into the carriageway, especially at corners.

Blind and partially sighted people are not very confident as a rule. They tend to move slowly and cautiously. Perhaps the collisions between them and cyclists happen because they have not got out of the way as quickly as the cyclist expected. There are many collisions, often in quiet areas with plenty of room for the cyclist to avoid the pedestrian. They are mostly not reported to the police because the injured pedestrian feels that nothing can be done as the cyclist cannot be identified. The frustration this causes can lead to the sort of ‘road rage’ where people cycling in pedestrian areas are dragged from their bikes or shouted at.

I have used up all my allowed space without even mentioning the perils of bikes parked or lying in unexpected places, like in front of shop doorways, another cause of difficulty for people who can’t see. Children seem especially good at this, though some of them are especially good at helping blind people too.

Cyclists are being encouraged to use pavements rather than carriageways because collisions between them and motor vehicles are usually fatal to the cyclist while collisions between cyclists and pedestrians are not usually fatal to either party. I believe that collisions between cyclists and pedestrians are completely unnecessary, but it is the cyclist’s responsibility to avoid pedestrians by giving notice of their presence, by reducing speed, perhaps even to walking pace, and by giving way. Saying, ‘Excuse me,’ and ‘Thank you,’ where appropriate might also help to promote goodwill rather than fear and antipathy and to reduce the strong feelings of indignation in pedestrians, sighted or not, at the invasion of footpaths by wheels. Perhaps members of the Cambridge Cycling Campaign could set an example and influence the behaviour of all cyclists for the better.