Barton Road is not on my side of town, but I had heard of the plans for a cycle route down there, and the rounds of negotiations with the local residents. I volunteered to go to the opening as a representative of the Cycling Campaign, as no-one else could make it.

The event was in the form of a bike ride from Shire Hall to the cycle route and back. At Shire Hall I met up with the opening party, which consisted of Councillors and Officers, including John Edwards, the senior engineer of the project. Unfortunately he couldn’t use his own bike because it had been locked to another in the bike sheds, so he ended up borrowing one of the Kensington bikes provided by Geoff’s Bike Hire.

We set off down Lady Margaret Road, and I think a few of the party were quite surprised at how busy and dangerous the right turn onto Madingley Road is. This junction is set to be controlled by traffic lights, but we are likely to lose the privilege of turning left into the road from Castle Street (see Mount Pleasant to become pleasanter).

The group spread out down Grange Road, but we all arrived at the cycle route at the end of this road where it forms the stem of a T-junction with Barton Road. The cycle route crosses the end of Grange Road on a raised crossing, and cyclists are supposed to make sure the route is clear before moving on. Motorists turning into or leaving Grange Road have right of way. I was worried at the sight of this junction because it is designed in such a way that unobservant cyclists think that they can carry straight on over Grange Road without looking, and I saw one cyclist do just that. I am worried that a vehicle will turn into the junction into the path of a cyclist. This type of junction occurs several times on the route and the combination of this danger and the requirement for the cyclist to give way frequently tempers my enthusiasm for the route.

The group stopped on the cycleway for photographs, blocking the route. It was amazing how soon we had a bunch of agitated bona-fide cyclists waiting to get past. This confirmed that the route is well used by cyclists going both ways, although it is rather narrow for busy two-way cycle traffic.

At the east end of Barton Road, a new set of traffic lights has been constructed. This features a cycles-only phase of the lights. There is also a separate pedestrian crossing, and its phase is linked to the cycle-crossing phase. 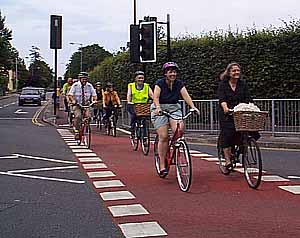 The cycle crossing is activated by detectors mounted in the cycleway. These detectors respond to metal in the bike, and if you haven’t got enough metal, or the right sort, you’ll have to press the button. Once detected the ‘Wait’ light comes on. I spoke to the engineer about these detectors, and complained that often they don’t detect bikes. He explained that the detectors are most sensitive at the corners, and so to increase detection the wire loops in the ground are now arranged in a butterfly formation adding two more corners.

At the Barton Road lights, the engineers had to face the added problem of two-way traffic on the cycle route. Cyclists completing the crossing go over the detectors for cyclists coming the other way, which ordinarily would trigger a new crossing request. They solved it by staggering two butterfly loops at each side. If the loop nearest the road detects first then the system infers that the cyclist has completed the crossing and doesn’t register. I’m grateful that they thought it was worth going to all that effort to save me having to push a button: it puts cyclists on the same terms as motorists!

After photos for the press at this junction, we headed back for a buffet lunch at Shire Hall. Being face to face with a lot of councillors and officials whose allegiances you don’t know is a scary experience, and it was a time to tread carefully so as not to upset people. It was heartening to hear how well respected the Campaign is, and there were some very favourable comments about the Newsletter.