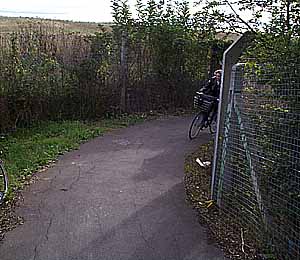 We learnt recently of a local cyclist, Meredith Williams, who was injured in a collision with another rider on a blind corner on the path over The Tins – the quarry between Cambridge and Cherry Hinton. After a night in Addenbrooke’s, he tried reporting the incident at Parkside Police Station. He was told this didn’t count as a Road Traffic Accident, so he couldn’t be given an incident number.

This raised serious alarms with one of our members, who asked us whether this was correct.

I’m amazed to report that, according to the CTC lawyer (who was most helpful), yes, this is correct.

170.–(1) This section applies in a case where, owing to the presence of a motor vehicle on a road, an accident occurs by which–

It goes on to list the driver’s responsibilities, including when, and what, to report to the police.

The key phrase, though, is ‘owing to the presence of a motor vehicle on a road‘.

A lot of emphasis is placed on ‘accident’ figures by local authorities. Any flaw in the data collection process can bias the figures. For example, many cycle organisations have expressed concern that shared-use paths could be more hazardous than the road. It seems from this incident that collisions on them would probably not be recorded.

Although not of concern to the police, I am also worried that insurance companies will be less likely to honour any claim in the absence of an incident number.

What can you do?

In this case, the only redress for the injured cyclist would have been to write to the police, stating, for example, that he felt the other cyclist was cycling carelessly on a path which he believed to be a bridleway, and giving the other cyclist’s name and address.

So when is a collision not a collision? When it doesn’t involve a motor.

To research this subject, I bought copies of the 1996 Highway Code and the 1988 Road Traffic Act, and spent some time comparing the two. I’m happy to lend out my copy of the Road Traffic Act if anyone’s interested in it!

Incidentally, I’ve mentioned this incident to a few of our members who cycle regularly over the railway bridge by the quarry, and several have said that they slow down and ring a bell before the blind corner. This seems a wise tactic, although as Meredith said, ‘In this case, though, I think even a foghorn would not have attracted the attention of the other cyclist. Shouting at the top of my voice was not enough to make this guy even look in the direction he was travelling.’