Frustrated by having to give way to cars at every side road crossing on a cycle track, this question is one that so many of you keep asking us. So I asked John Richards, the County Council’s Cycling Officer, if he would explain the Council’s position.

David Earl: Why is it that cycle tracks in Cambridge must always force cyclists to give way to vehicles when they would not have to on the main road? 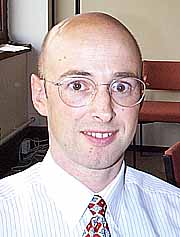 John Richards: Cyclists using off-road cycle tracks are normally required to give way to traffic (including other cyclists) using the carriageway, in the interests of safety. In our experience traffic turning into side roads is rarely prepared to give way to pedestrians or cyclists crossing. I appreciate this is contrary to Highway Code advice. But the difference between how road users should behave and how they do behave is an important aspect of safety engineering work. If everyone behaved as they should there would be few accidents!

Our concern about the arrangement you advocate is that if the pedestrian or cyclist is given clear guidance that they have right of way they are less likely to avoid a collision with a vehicle which is turning into the side road and isn’t going to stop. In such an incident it’s clear who is going to get hurt. I prefer the arrangement where the pedestrian or cyclist is encouraged to give way and make the judgement themselves when it is safe to cross, for their own safety.

Would this still be the case if cycle tracks were one way?

I believe this would still be the safest arrangement were the cycle track one-way (assuming the direction of flow is with adjacent traffic rather than against), as the cyclist is still having to look to the side and behind to see approaching traffic. The mechanics of creating one-way cycle tracks would be difficult and I believe would only work if the track was part of the carriageway rather than separated from it. Of course, where paths are provided on both sides of the road but separated from it, as at A14 Histon Interchange, the flow is effectively one-way.

What would it take to allow cyclists to have priority? How can this be achieved?

I share your desire that it would increase cyclists convenience if they could be given priority at side road crossings and that breaks in continuity can be a disincentive to use, particularly for certain types of cyclist. Therefore, this is an arrangement which, in time, I hope we may be able to establish. Recent schemes like Barton Road have been designed with this in mind.

However, before such an arrangement is commonplace I believe we need to get further with the shift in direction to more sustainable transport. We need more people walking and cycling, less driving and plenty of well engineered schemes. I hope this will come with time as public acceptance grows, as has been achieved in some other European countries.

‘Measures will be provided, wherever possible, which improve cyclists’ safety and give cyclists greater priority (in terms of access and journey time) over other traffic, on all roads with significant cycle flows’ – National Cycling Strategy model cycling policy.

Safety Audit is a formal process you use to look for flaws before changing a road layout. Do the Safety Audit procedures or other safety considerations take into account that many cyclists do not use cycle tracks because of frustration with giving way?

Safety engineering work in general does recognise that many cyclists, particularly the more confident, do not use cycle tracks because of frustration with giving way. The more formal Safety Audit process looks specifically at the safety implications of the scheme design, including the details, for all road users. It is carried out by staff skilled and experienced in accident investigation and prevention work. The process is not intended as a ‘re-design’ of the scheme.

Do you agree with Cambridge Cycling Campaign’s general desire that where a cycle track is provided it should not inconvenience cyclists or pedestrians to any greater extent than it would if cyclists used the adjacent road?

As a regular cyclist I do support Cambridge Cycling Campaign’s desire that any scheme design, not only tracks alongside roads, should not compromise the convenience of cyclists. However, I understand this is always going to be difficult to achieve, particularly in the short term, compared with more direct routes usually along the main road network.

The balance of convenience against safety is an important one. The Cambridge south-east cycle route is less direct than the main routes, but is well used, because people consider it safer. I believe the ‘after’ study supported this and indicated that significant numbers will divert to a safer route providing the increase in trip length or time is not greater than 10-15%.

Are cycle tracks actually safer than using the road? Have any studies been done?

Various studies have been undertaken over the years on pedal cycle accidents in Cambridge. I suggest you contact our Traffic and Accident Data and Research team for more information. I know that the level of cycle accidents on off-road tracks is generally lower than on the carriageway, but to what extent this has been related to levels of usage I am unsure.

Do you use cycle tracks yourself?

I do sometimes use cycle tracks myself, but not always! I guess like most other regular cyclists I make a judgement as to how convenient they are to the trip I’m making, and obviously allied to any safety considerations. This is based as much on time of day, traffic and weather conditions as on the quality of the facility provided. I do strongly believe, however, that all facilities, even the lower-quality ones, have a role to play in encouraging more people, perhaps not regular cyclists, to cycle more often.