I hesitate to raise the subject of cycle helmets in these pages, because it is a subject which raises passions on both sides of the argument, often with little fruitful outcome. It is certainly a subject where non-cyclists have very strong opinions on what is best for cyclists and the nanny-state culture and victim blamers get to work overtime.

However, the British Medical Association conference in the middle of July took a balanced view of the subject in response to a motion that the BMA should promote compulsory wearing of helmets. This is an important decision, so I felt we should report it here. The organisation understood the reasons why so many cyclists – even those who wear helmets themselves – are against compulsion.

The experience in places where this has been done is that there is a huge reduction in the number of people cycling. Not surprisingly this has sometimes been accompanied by a fall in casualties. In some countries however, the severity of injuries has actually risen – speculation as to why includes the possibility that the mix of types of cyclist left has changed, and that risk compensation (the effect of feeling safer – warranted or not – making you take more risks) may play a part. 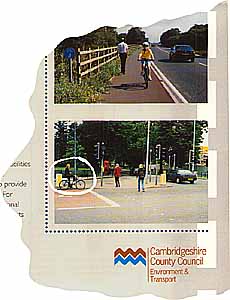 The reduction in cyclists has serious knock on effects in terms of health and longevity. Because regular exercise is so important to health, the potential reduction in cycling outweighs the casualty reduction from reduced head injuries. This is why the BMA stepped back from supporting compulsion.

From a principled point of view, another reason why so many cyclists feel strongly about this issue is that a great deal of time, effort and money can go into promoting cycle helmet wearing. That effort could have been directed at the source of the problem, largely the excessive speed of motor vehicles.

In spite of many fewer than 20% of Cambridge cyclists wearing helmets, we get silly dictums from the County Council that any cyclist in publicity coming from them must be wearing a helmet. This just makes leaflets featuring more than one or two cyclists look odd, because they are so unrepresentative of the real world. Mind you, they slip up sometimes. The recent glossy on the Hills Road proposals shows a cyclist without a helmet – and this looks ordinary and typical, and is much the better for it in my opinion.