When we moved back to Cambridge, we decided that we preferred a child trailer to a child seat. A short search of magazines showed that D.Tek in Little Thetford (run by Kevin Dunseath) claimed to have the best range of child trailers in the UK, so we decided to visit them. We spent a happy four hours being shown what sorts of trailers were available, and talking about the pros and cons of the various models. We decided in the end on the Burley D’Lite, mainly led by our need to be able to fold it for storage (no longer so necessary in our new house with a garage).

On the whole, the trailer has been a Good Thing. Michael appears to quite like it, and happily points to Daddy’s Bike and Michael’s Trailer. Some of the children at the nursery are clearly fascinated by it, and I quite often hear pedestrians say things like ‘Hey, there’s a kid in there.’ 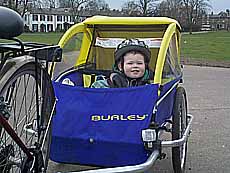 The main snag is that the trailer is too wide to fit through many of the obstacles that the council places at strategic points along cycle-paths. In particular, most posts with ‘ears’ are too narrow (for example, the only useful access to Midsummer Common is the cattle grids).

The bike’s handling isn’t affected as much as I might have expected. Michael’s weight is noticeable when he’s in it, and the trailer does act as a drag when cycling into the wind. On the other hand, it’s a surprise how skittish the bike seems when it isn’t attached!

Other road users (cars in particular) do seem to give us quite a wide berth. Interestingly, when I’m cycling without the trailer, I’ve become more assertive about taking the road space I need.

Against trailers (for child seats)

Buying or renting a trailer

Our main piece of advice on buying a trailer is to make sure that you (and your child) try it out first. It’s also a good idea to try out at least two different trailers.

Most of the main Cambridge bike dealers sell a child trailer of some sort – I know Ben Hayward’s sell Trek (and can talk sensibly about them), Howes have some sort of trailer up by the ceiling, and Mike’s Bikes have a Burley D’Lite in their rental shop, as well as a Burley and something else in their main showroom. However, we definitely recommend going to a specialist dealer in the first instance.

Locally we recommend D.Tek. They normally have 14 to 20 different models of child trailer in stock, with costs from £170 (second hand) to £600 (rather expensive!). They also rent, and when selling a trailer you can treat the first month as rental. Do note that Kevin does not necessarily keep normal shop hours, so phone first. The shop is obvious once you’ve seen it (across from the church).