The Dutch brought in the idea of the Woonerf decades ago. These specially designated streets change the whole feel of an area by a combination of design, construction and legislative framework. Cycle and transport campaigners have raised the idea here periodically, but now a serious initiative to recover residential streets from their present car-dominated state is being promoted by the Children’s Play Council, part of the national Children’s Bureau. They have called them Home Zones. They take traffic calming a whole stage further, beyond toy-town layouts such as Cherry Hinton High Street, to a complete change of street architecture that, while still allowing for cars, de-emphasises them. The concept places value on the street as a place for people, enhancing quality of life, safety and environmental sustainability. They fit well into ideas for safe routes for schools.

Changes in legislation would be needed. Some moves have been made recently on 20 mph zones (we have yet to find out the details), but putting responsibility for safety firmly on the driver is beyond this. Helen Brinton, MP for Peterborough, has been promoting a 10-minute rule bill through Parliament (though it looks as if something went wrong on March 6 when it should have been debated in the House). 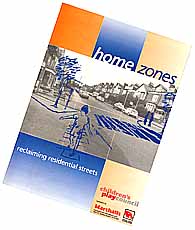 The Children’s Play Council has produced an excellent booklet on the subject in conjunction with Transport 2000, the Child Accident Prevention Trust, and Sustrans. They also seek expressions of support and have a form for the purpose, both for organisations and individuals. We have signed up for the Cycling Campaign, and we can make copies for you if you would like one. You can contact CPC on

cpc@ncb.org.uk or find the booklet on the net at www.ncb.org.uk/cpc.htm.