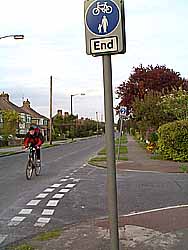 Just before Cambridge Cycling Campaign was formed, the footpaths alongside Queen Edith’s Way, in the south of the City, and one of the paths on Cherry Hinton Road west of Walpole Road were designated ‘dual-use’. In other words, cyclists could legally ride on them. A commitment was made that the change would be reviewed after three years, and that time is up. We reviewed it too, by carrying out our second cycle survey there on 1 May.

The change was made simply by putting blue signs all along the footway, and by dropping the kerbs at the side roads to be flush with the road. There was no attempt to construct a proper cycling surface, consider the side road crossings (of which there are twelve), or make room for pedestrians and cyclists to share. No consideration was made as to what cyclists would do confronted with the junctions at either end where the cyclist is expected to rejoin the road. And the path runs right alongside the hedge-line, with hundreds of driveways opening directly onto it. In fact it demonstrates perfectly almost everything we think is wrong with shared-use. If the Cycling Campaign had been formed when this was proposed, the chances are we would have opposed it.

The position is a bit more complicated now. Netherhall School is right in the middle of Queen Edith’s Way and students there do make use of the footway. For them (or perhaps their parents) this is a solution, but for the many pedestrians using the street, it is a problem especially at school times. The children also use the footways in the neighbouring streets, which aren’t designated specially – also one of the common side effects of shared-use. However, given the level of use, it is much more difficult to say ‘take it out’ after three years than it is to say ‘don’t put it in’ in the first place.

For these reasons, we thought it was time to get out our pencils again and see what the situation actually was like in Queen Edith’s Way. A dozen members worked a rota from 7 am to 7 pm recording numbers of bikes and pedestrians, on each footway and also using the road. The day was rather wet, so we suspect the absolute numbers were well down from most days, but it was the ratios which were more of interest to us.

At the same time, Amanda Taylor, a ward councillor for the area and also a Cycling Campaign member, has been inviting local comments to input to the review. She has received more than 60, mostly very critical of the shared-use, where pedestrians say they are intimidated by the cyclists. This also comes as no surprise to us.

Of course, there is no money to do something more positive either, or any prospect of any through existing funding channels. One possibility is that more funding might become available some time through Safe Routes To School projects, which the Government is very keen to support (or so it says in its recent guidance to local authorities applying for funds). Another is to prioritise the area for traffic calming.

What are the alternatives? Since intimidation from traffic is the main problem, speed reduction and more space for bikes would seem to be obvious answers. Traffic calming and street architecture should therefore definitely be on the agenda, here as everywhere. The junction with Mowbray Road (which is a medium sized roundabout, but with very awkward visibility) needs to be addressed to make it cycle friendly, and the junction with Long Road is not ideal. It is inconvenient when cyclists are stuck in a long line of traffic queuing at the lights. As noted elsewhere, the Robin Hood junction at the eastern end is also in need of further attention.