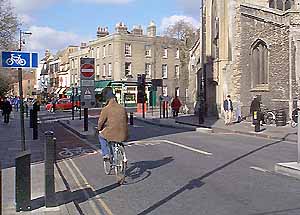 The Bridge Street closure was made permanent at the County Council Environment and Transport Committee on 19 March. Thank you to everyone who wrote and sent postcards about the scheme. The decision was still in the balance until recently, when South Cambridgeshire backed it. At the meeting, I spoke in support of the petition many of you signed. We were undoubtedly influential in the outcome.

The main concerns raised in the debate were the impact on traders in Bridge Street, which was unclear, and the impact on Victoria Road.

What next? Bridge Street is supposedly stage 1 of the Core Traffic Scheme, and moves will be made to consider what further traffic restraint in the central area should happen next. More also on Bridge Street, however: we can expect to see proposals now for street architecture changes. Officers are also tasked with looking at Victoria Road.