The cycle route along Barton Road is proving to be a long-drawn-out saga. However, it is drawing to a close – construction will begin soon, and needs to be completed this financial year, that is, by April.

There is good news and less good news. First of all, the good news is that the traffic signals including the cycle phase that were described in the last newsletter are to go ahead, pretty much as planned. We suggested a forward stop line should be added at the Grantchester Street exit, and it looks as if that will be included. 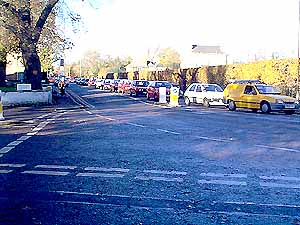 The deciding committee (the Cambridge Area Committee see Method in the madness) gnawed over the junction like a dog at a bone, but eventually decided to proceed. I have had varying opinions as to whether this is actually the last we’ll hear of it before construction, but hopefully work will start in February or March next year. Members in Owlstone Road may already know that they have a vociferous anti-cyclist as their neighbour, judging by his letters to the committee about this!

The less good news is that the two-way cycle track along the length of Barton Road proposed to the committee was only 1.5 m wide (for comparison, the suspension bridge at the station has 2.7 m for cyclists and 1.8 m for pedestrians). This was contrary to what was stated at the previous Cycling Liaison Group; it would only have been this narrow where there were obstacles which prevented it being 2.0 m. One and a half metres is barely room for two cyclists to pass, which means they will often have to cross onto the new footway alongside.

As soon as we saw this, I wrote to members of the committee, and the question of width was referred back to the Liaison Group. As a result, the central section will be the full 2.0 m, but the trees make the western end in particular difficult to make wider. At the time of writing it looks as if a further 80 m stretch will also be wider, giving between a third and a half of the length of Barton Road at a decent if not generous width.

The four-way Give Ways at each of the side road crossings have been made three-way, giving vehicles turning off Barton Road priority over the side roads, though the crossings will all be on raised tables.

One outcome of this whole process is that we are likely to take a much less sympathetic line on future proposals of this kind. It appears that there is still a gulf in interpretation of what ‘quality’ means. I was particularly saddened by one comment at the Liaison Committee, who called the wider section of path a ‘concession’ to us, as if the aim was to build to a minimal standard unless we shout loud enough. On this occasion, making a fuss has paid off, at least to some extent. 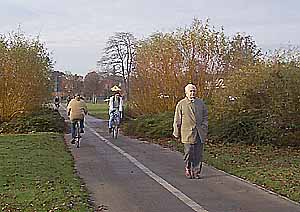 It’s easy to see what the narrower sections will look like, since they will be very similar to the existing path on neighbouring Lammas Land.