For me, one of the most fascinating parts of my recent trip to Liverpool was the visit to the Liverpool Cycle Centre (LCC). The two partners who founded LCC (as a business concern) received the largest private award from Cycle Challenge (that’s the pot of money that funded Cambridge’s Cycle Friendly Employers Scheme). One of them, Simon O’Brien (a.k.a. Damen Grant, of early Brookside fame), gave an hour long workshop at the conference, to tell us all about the Centre. It is a combination of café, bike shop, secure cycle park, exercise gym, shower facility, locker room, information resource and meeting venue. Perhaps the most eye-catching part of it all is ‘The Hub’ café. It’s vegetarian, vegan and licensed. The furniture has to be seen to be believed. It’s entirely made from donations of old, unrepairable bikes. 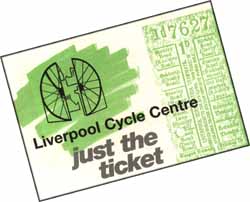 The aim with many of the facilities is to hit the commuter market. You can arrive, park your bike securely, take a shower if you want, leave your bike things in a fairly spacious locker, leave your lights to be recharged by solar energy, maybe have a bite to eat in the café and then head off to work. It’s a fantastic service for people who work for organisations which are too small to provide such facilities, in a city which, at the moment, doesn’t really have much of a cycling culture at all.

The building itself is huge, and was refurbished to exacting environmental standards. All the wood was re-used from elsewhere. Huge amounts of insulation were used to save on heating costs. Every room has natural light, to save on electricity costs. Rainwater is collected to flush all the toilets in the building.

It’s been a hard first year, with overheads on the café being much higher than expected, but they’ve just broken even within the last couple of months. If Simon’s creativity and vision for new opportunities for the Centre are anything to go by, it’s bound to succeed.

If you’re ever in Liverpool, I recommend a visit to 9-13 Berry Street. You won’t be disappointed. Oh, and take a camera. I wish I had