‘The bicycle is the most civilised conveyance known to man. Other forms of transport grow daily more nightmarish. Only the bicycle remains pure in heart.’ Iris Murdoch quoted by Pryor Dodge, in The Bicycle Flammarion 1996

‘Little can be done to improve the technology of bikes. The challenge is to create machines more tailored to the needs of the user. It’s about providing added value, about taking the hassle out of everyday cycling problems – problems with punctures, brakes, dirty chains and so on.’ Mike Burrows Design Autumn 1996

The Design Museum is running a major exhibition entitled Bike: Cycles, the first major exhibition in the UK devoted to exploring bicycle design history from 1825 to the year 2000. More than 85 bikes, including the latest models and prototypes feature in the exhibition, as well 250 pieces of supporting material: photographs, drawings, videos, posters, accessories, clothing and magazines.

In staging this exhibition, the Design Museum is responding to the bicycle renaissance of the last decade, which has seen a considerable increase in the number of cycling organisations, publications and interest groups. The bicycle, arguably one of the greatest inventions of the modern era, is one of the most enduring and familiar industrial design products of the last 200 years. Established in 1817 by the ‘Running-machine’ as an aid to walking, it has developed throughout the twentieth century to become an affordable and liberating form of transport, available to everyone.

Unique loans from the private collection of New Yorker Pryor Dodge illustrate early innovations in bicycle design from 1825 to 1988, a period which set the parameters for the bicycles of today. From pre-pedal machines came the introduction of the pedal with the Velocipede or ‘bone-shaker’ bicycle.

In the 1870s manufacturers made use of superior materials such as tubular steel and rubber to produce what became known as high bicycles. Rear wheel chain driven safety bicycles brought with them independence, with the highwheelsafeties and tricycles. The chain drive and pneumatic tyres, introduced in the 1890s, produced a smoother and lighter ride. Aeroplane and automobile design produced new materials and suspension technology for bicycle design.

The period 1989-97 has seen the influence of lifestyle on bicycle design in the form of mountain and city bikes, folding and concept bikes, trailers, tandems, tricycles and racing bikes. It has influenced the design of bicycles for specific markets including children, teenagers, men, women and disabled people. In 1992 Chris Boardman raced to Olympic victory on Mike Burrows’ carbon fibre monocoque bicycle, featured in the exhibition alongside other significant international designs, including the Birdy Elox by Riese and Muller, the RAC All Purpose Bicycle designed by Alex Moulton, and Porsche’s FS Bike. 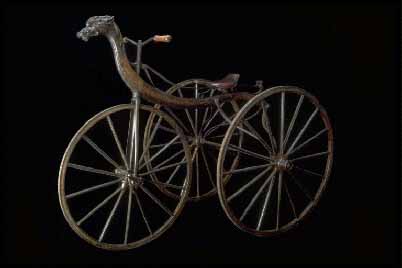 Velocipede Tricycle 1868 – Michaux, Paris height 53″ length 76″ width 25″. This bicycle features an elaborately carved griffin’s head and burlwood handlegrips. This is probably the most magnificent tricycle in the world. It was exhibited in the Exposition Ritrospective du Cyc/e at the Grand Palais, Paris, 1907

The Design Museum questions ideas about the bicycles of tomorrow with the inclusion of concept bicycles from this year’s international Vision 2000 competition organised by Shimano, including the winning design, ‘Tango’ by Urban Solutions, and the five winning bicycles from Shimano’s European Bicycle Design Contest.

It was recently reported in the press that a drawing of a bicycle found among Leonardo Da Vinci’s papers in the 1960s wasn’t by the man himself, or even by one of his students as previously suspected, but by a twentieth century doodler! As this exhibition shows, bicycles weren’t invented until the early nineteenth century, and didn’t take the form we are familiar with until the late 1880s. It was then that cycle innovators first brought together a number of features that hitherto had only been applied haphazardly – small wheels (well, smaller than the front wheel of a penny-farthing’), chain drive to the rear wheel, direct steering, and pneumatic tyres. This exhibition tries to show how bicycle design moved firstly towards this coherence, and then beyond it in a variety of directions – with family cycling, and the development of bikes for women and children; shopping and city bikes; innovations for racing cyclists; the explosion of mountain bikes; and finally a section on bikes for the future, based on a recent design competition.

The space is well laid out, giving it a warmth not always evident in other museum bicycle displays I have seen. One side of the room is set up as a banked race track on which sit a wide variety of machines, overlooked by many sumptuous full sized advertising posters, mostly from the heyday of bike posters in the 1 890s. It was quite impressive to be close up to early bicycles which were in exceptionally good condition, unlike those in most other museums. It was an eye-opener too to realise that many of them were painted in bright colours. Most old bicycles I’ve seen are a grubby old rust colour!

That point, though, also indicates a failing of this exhibition in fact, most early bicycles were neither rusty nor brightly coloured, but black. Whilst many of the more noteworthy machines over the years have stood out visually in different ways, there is little attempt here to show the more mundane models that cyclists in the street would have been using. Most bikes on display are unusual one-offs. Whilst the exhibition does tell a little about the historical context of these unusual machines, the visitor is left with an impression of bicycles as something weird and wonderful, rather than everyday and ordinary. Cycle campaigners, at least, need to concentrate on everyday, ordinary cycling. This skewed impression of bike design isn’t helped by the large number of 1997 and even 1998 models which manufacturers must have been all too happy to lend the museum as free publicity. The trouble is that the shiny new components on this year’s models may be consigned to the bike workshop scrap heap by next year along with many of the one-time innovations on display here.

A further gripe about the exhibition is a rather too prominent ‘word from our sponsors’ – Michelin. The display cabinets of cycle accessories and photographs are fascinating – including both Conan Doyle and a very young Princess Elizabeth on bicycles – though lacking much commentary. The one exception to this is a history of pneumatic tyres. However, this is somewhat re-interpreted to focus on the history of Michelin, something that highlights the general lack of contextualisation of the exhibits. The history of bicycles hasn’t been a history just of objects, but also of rivalries between manufacturers and racers, of innovations in design and in manufacturing, of changing cultural values towards travel, space and place, the city and the countryside, nature and the environment. Not enough of this context of cycle history is evident in this exhibition.

Nevertheless, the exhibition certainly gets closer than most other displays of historic bicycles. Whilst I’d hesitate to pay the £5 (£3.75 concessions) admission fee, it does offer an interesting and enjoyable way for any cycle campaigner to take their mind off traffic lights and lane widths for a couple of hours.

The exhibition runs until 22 March 1998 (the Design Museum is open 11.30-6 pm weekdays, 12-6 pm weekends; nearest tube Tower Hill, cross Tower Bridge then down the steps onto Queen’s Walk by the river; the Museum is to the left)