This was the title of the high-powered seminar at the end of October that set the scene for the new Travel for Work project which now incorporates and extends the Cycle Friendly Employer scheme. Cambridge Cycling Campaign is still a partner in the project.

The morning was attended by business people from the City and neighbourhood, together with some councillors and hangers-on (like me). It was also a co-operative effort between the City and County Councils. City transport planner David Parkin and County Travelwise co-ordinator David Arkell organised the event, and Peter Studdert, the City’s Planning Director, and Brian Smith, County Council Director of Environment & Transport, chaired.

Unfortunately Roads minister Baroness Hayman pulled out, but sent as her replacement Government transport whip Graham Allen, MP. His time was mostly spent looking at the national picture, and especially the Integrated Transport consultation paper. Certain councillors of a different party were observed in a rather childish pooh-poohing of what he was saying; party politics just seems to get the better of them More specifically, Ian Chatfield from Nottinghamshire County Council and Carey Newson from Transport 2000 gave a run down of what Travel for Work means for them. In Ian’s case it is the ‘STEPS’ scheme operated by the Council, which has some ambitious targets to decrease single car occupancy travel by Council employees. This would be achieved by many of the methods which Carey outlined, citing examples from all over the country. 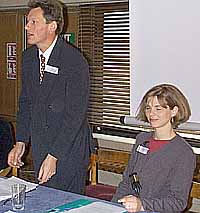 One of the main barriers to car sharing, for example, turns out to be people’s fears that they would be stranded in an emergency, so the reassurance of a ‘get you home’ scheme is important even though it is rarely used. (It’s really sad that people used to driving everywhere are so like fish out of water without their tin boxes.) Cycling, walking and greater bus use, especially involving the bus companies were prominent, but identifying where employees live is vital information to plan services.

The main purpose of the day was to bring companies into the scheme. Teresa Broadstock, our Travel for Work co-ordinator spoke last, with a very professionally produced presentation that focused on her role and the local project. The recent good news is that she has a good batch of companies to get started with. 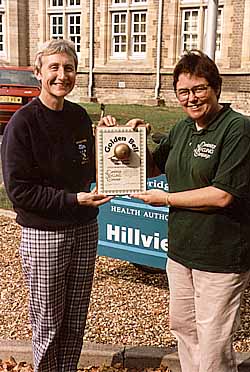 In the meantime, Anne Taylor, Promoter for the Cycle Friendly Employer scheme, has moved on to a full time course at the University of Cambridge, but before she left, Clare presented her with the Cycling Campaign’s ‘Golden Bell’ awarded during National Bike Week.