Within days of the go-ahead being given, the bus lanes were being painted on Newmarket Road. When complete, as we reported in the last newsletter, there will be special traffic lights to let the buses past the cars.

We wrote a long response to the original plans, and were very pleased to find that many of the points we made were incorporated into the scheme. It’s too early to tell yet, but it is quite possible that the end result will improve matters for cyclists, especially at the out of town end. 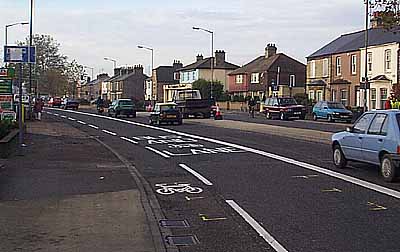 A bike lane within the bus lane – an innovation for Cambridge, all the more important now that taxis as well as buses use the bus lane. When the paint has had time to dry, we shall know how well it works.

We suggested that in the wider lanes the cycle lanes should be retained (a lane within a lane). They said yes, but narrower. But in fact, they’ve gone in at the same width as the originals. They’re marked as advisory, but since the usual problem with these- parked cars won’t apply here, the effect should be that the bus lane acts to give cyclists more space.

We suggested that the traffic lights which weren’t part of junctions could have a permanent green filter for cyclists to go straight through – and they will have. And we hadn’t realised that cyclists will in fact trigger the other lights anyway – they just won’t have the ability to stop the rest of the traffic like the buses.

The slip lane to get cyclists onto the shared-use at the Park and Ride site has been moved back to before the start of the bus lane, opposite the entrance, so park and cycle people can get onto it if they want – another of the comments in our letter. Not that there is any particular reason not to stay in the bus and cycle lane.

We couldn’t get any improvement to the standard of the shared-use out of the same pot of money, but as you can see elsewhere, this corridor will have a further review next year specifically with cycling in mind. Three junctions – Ditton Lane, Barnwell Road and Coldham’s Lane- really need to be addressed .

So, this could be quite good news. We’ll monitor what’s going on. In the meantime, tell us what you think if you use Newmarket Road.