The new Milton Road consultation is now open and the Greater Cambridge Partnership has published the latest proposals for the road. There are substantial improvements from the version originally published over two years ago. The design team has largely put into place an avenue of trees protecting cycleways that are segregated from footways. We thank them for engaging and listening on that point. However, there are still significant problems with the current proposal and we intend to respond to these in the current consultation.

The proposed design between Gilbert Road and Elizabeth Way has a bus lane that we believe is simply unnecessary and seriously compromises the remainder of the plan on this rather narrow section of Milton Road. We know that the current bus lane is rarely used by buses, and the data provided by GCP from the beginning of the scheme show a long-term trend of falling car traffic counts on this section of road, because most car traffic heads towards Elizabeth Way. This section of road is quieter than the rest of Milton Road and it should become even more so after GCP implements their City Access study recommendations. Therefore, the bus lanes here will be wasted tarmac, while the space for trees, cycleways and footways are all badly squeezed. Ever since we helped publish the ‘Do-Optimum’ proposal we have advocated for context-sensitive design and the context here calls for traffic reduction measures, not brute force bus lanes. 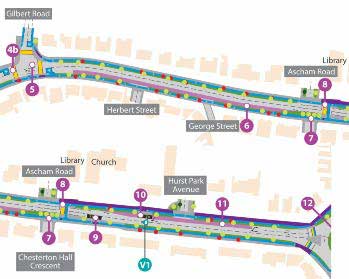 We have always maintained the importance of supporting the numerous families who walk and cycle to the schools near Ascham Road, and enabling more families to join them. The council officers have proposed making the outbound-side footway into a shared-use pavement for this purpose. We had instead called for a bi-directional cycleway segregated from the dedicated footway, but that idea was ultimately shot down because there wasn’t enough space at side-road junctions to make it work. However, the reason there isn’t enough space at side-road junctions is primarily because of the bus lane in the narrow section of Milton Road, mentioned above. This is yet another reason why the bus lane is inappropriate between Gilbert Road and Elizabeth Way. From past discussions, we had been under the impression that there would be crossings installed at Downham’s Lane and Fraser Road. However, the consultation proposes that only one of these two would get a crossing. Milton Road is currently too much of a barrier and we believe that each of these locations should have a crossing.

It is disappointing that the cycleway is downgraded to an unprotected cycle lane between Westbrook Drive and Gilbert Road, outbound, but we are glad that the officers have put a crossing of Milton Road at Westbrook Drive back on the table.

In general, we believe that segregation of walking and the main cycling route should be maintained throughout the scheme. At every point where a pedestrian crossing of a cycleway is needed, a simple Zebra crossing should be painted on the cycleway.

We also strongly support the safe bus stop design proposed that has the protected cycleway segregated from both the footway and the passenger waiting area. This ensures that everyone has a comfortable and safe space, and that there is a defined crossing of the cycleway (a Zebra, as specified above) for people wishing to use the bus. The diagram on the right shows what a safe bus stop design would look like with a Zebra crossing of the cycleway.

Plans for a new nursery building on the existing Faculty of Education car park, with associated play space, car, cycle and buggy parking. We have objected as the applicant has poorly understood the use of cycles by Cambridge families. Very few larger hoops for cargo cycles are provided despite their popularity for travelling with children. The largest area of sheltered cycle parking is the wrong side of the car park for the nursery, so unlikely to be used by parents dropping off children. The proposed two-tier cycle shelters are difficult to use for cycles with child seats fitted. We also have safety concerns. There is no separation between areas where toddlers will be walking around as they arrive and areas where cars will be turning. Additionally, the access statement inappropriately suggests cyclists share a narrow pavement rather than proposing steps to reduce risk from motor-vehicles.

Construction of 99 homes on land south of Fen Drayton Road, Swavesey. We have been pleased to see that newly revised plans have removed exclusionary chicane barriers from the paths. We are still objecting to substandard cycle parking sheds which are smaller than a standard pair of cycle spaces as outlined in Cambridge City Council’s Cycle Parking Guide for New Residential Developments, additionally objecting because their location is not shown on the planning documents so we cannot evaluate their accessibility.

Though plans for this 126 dwelling development in Cottenham have been revised, our concerns have not been addressed. A proposed walking and cycling link to Rampton Road retains a barrier for motor-vehicles that is too narrow to be passed by anyone using a mobility scooter, wide cargo cycle, tricycle or pulling a trailer. We have again responded with recommendations for an improved layout for access by these users.

We have written in support of a café and cycle repair shop located alongside the Chisholm Trail, as it would create an amenity for people living in the neighbourhood as well as those using the Trail. Though construction on green belt is of concern to our members, we felt that the café usage would be consistent with similar cafés found within country parks, or at rest stops along trunk roads. The café would provide improved landscaping and keep the site free of the fly-tipping issues that have plagued it in the past. It would also provide toilets and a cycle repair station to assist people travelling along the Trail or visiting the nearby Leper Chapel. We have noted that any damage to the Chisholm Trail must be repaired and restored to its original condition, should major construction works for the café come after completion of the Chisholm Trail in this location.

A number of our earlier objections to this mixed-use scheme of 12 flats and two retail units have been addressed. Cycle access will be improved by modifications to the bin store and doorways. However, the central issue remains of a cycle store down a flight of steps with a wheeling channel. From our latest response: ‘Our genuine question for the applicant is: what are the options for a future resident or employee of the proposed building who is unable to use the bike-wheeling ramp with their cycle?’.

We have filed an objection to this application for 186 residential units in a ‘cycle friendly building’ in the Eddington district. The building itself is intriguing, with secure covered cycle parking at ground level, a dedicated cycle lane to basement-level cycle parking facilities (both of which include off-gauge spaces for cargo bikes and trailers) and the apartments, corridors and lifts designed to accommodate cycles stored within the building. However, there were a number of technical flaws that were the basis for our objection. These include clashes between swept paths for car-parking spaces and cycle racks, overly steep access ramps, and unclear management of cars accessing the basement via a single-car-width ramp. We hope the applicant will take up our recommendations in order to return with an improved application.

As we write, this plan has been recommended for approval by the Joint Development and Control Committee. Substantial changes were obtained over the past five months of campaigning. Unlike in the original plan, the Jubilee Cycleway will now largely remain intact, with a 3m-wide cycleway segregated from a 2m-wide footway where it passes through the development. At road crossings the applicants have proposed narrowing the roadway to calm traffic and leave only a single lane for walkers and cyclists to cross. There will also be new, direct and dedicated links on all sides of the site: to Ditton Lane, High Ditch Road and Newmarket Road. Furthermore, the applicants will create a high-quality diversion route for the Jubilee Cycleway during construction of the site. However, we are sad to report that the Morley Street Cycleway has largely been demoted to being a semi-shared use path. This was a proposed new cycleway alongside one of the new primary streets. Owing to urban design officer concerns, in subsequent revisions the cycleway has lost priority at side roads. These are now going to be a form of ‘shared-space’ junction where every road user is supposedly equal, but with small kerbs to outline the carriageway. We are not convinced that this junction design will work. It is likely to degenerate into motorist-priority, as such shared-space schemes generally do in the UK.