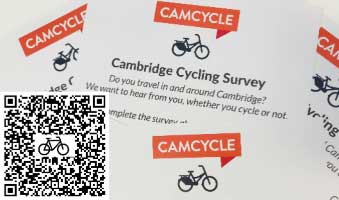 Over the summer Camcycle has been working on the Cambridge cycling survey, which was launched on 1 September as part of the Cambridge Festival of Cycling.

The goal of the survey is to find out about cycling habits and attitudes in Cambridge. It is particularly timely as it was just announced that Cambridge has, unsurprisingly, kept its title as the UK’s cycling capital.

The survey is for both cyclists and non-cyclists, so it could provide some useful insight into why some people do not cycle and how they can be encouraged.

By the last week of September, the survey had received over 500 responses, and it is hoped that this will continue to rise before it closes on 31 October.

Interestingly, thus far the majority of responses have not been from Camcycle members. The intention is that more members will be encouraged to complete the survey, as well as the rest of the community.

The results from the survey will help to generate data to inform our campaigning activities, and will be made freely available later in the year. The survey is also an opportunity for Camcycle to get out into the city and raise awareness of what it campaigns for.

The survey covers many different aspects of cycling, from commuting to cycling with children, and even about cycle colour! Camcycle is keen to hear all about cycling in Cambridge, the best bits and the areas that need improvement.

The feedback so far has been positive, with respondents complimenting Camcycle on its campaigning efforts and asking for more information.

It is hoped that this survey will be repeated each year and that it will help Camcycle to identify trends in cycling habits and attitudes, to inform our strategic planning.

We need members to make sure their voices are heard and complete the Cambridge cycling survey, so that we can continue to campaign for more, better and safer cycling in and around Cambridge.

You can access the survey at www.camcycle.org.uk/survey or by scanning the QR code above.