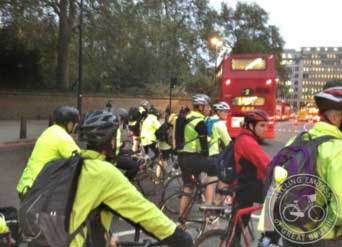 A sizeable number of people don ‘hi-viz’ or some form of ‘conspicuity-garb’ when cycling. Such garb is even recommended by the Highway Code, though not legally mandated. But is there a scientific basis for recommending conspicuous clothing, or is it simply a matter of wishful thinking? I looked at several recent scientific papers to find out more.

The authors surveyed 2,438 people who took part in the 2006 Lake Taupo Cycle Challenge in New Zealand and combined that with follow-up surveys over the following six years, connecting their data to police records of highway crashes. They divided the respondents up into four categories of conspicuity-garb usage based on the answers to the surveys:

Among other results, they found that the ‘usually conspicuous’ Class 1 riders were most likely to be involved in a crash with a motor vehicle, at an average rate of one crash every 73 person-years. The people least likely to be involved in such a crash were the ‘occasionally conspicuous’ Class 3 riders, at an average rate of one crash every 146 person- years. The most dangerous part of New Zealand was found to be Auckland, where Class 1 riders experienced a near doubling of risk, tempered by a slight reduction in risk for Class 3 riders, but in general there were many fewer cyclists in Auckland than other parts of NZ.

Verdict: wearing hi-viz was correlated with higher risk of crashes, especially in Auckland.

The authors conducted experiments using a fully immersive urban driving simulator built within the cabin of a Peugeot 208. LCD screens were mounted over every window. Participants were asked to drive through a diverse set of road situations, in daylight conditions, with a wide variety of scenery and other road users introduced in a randomised but controlled order.

Each driver was tested by many different encounters with cyclists, who were displayed in the simulation wearing either grey street clothing or a conspicuous yellow jacket. The scenarios were broadly categorised as ‘high cyclist visibility scenario’ in which the cyclist was positioned almost directly in front of the driver, and ‘low cyclist visibility scenario’ in which the cyclist might be off to the side or out of the direct line-of-sight of the driver.

Drivers were asked to record the moment that they noticed the cyclist in a given scenario and then rate how easy or hard they thought it was to see the cyclist. The simulation recorded two objective measures: the distance of the cyclist when first noticed and if the driver then crashed into that cyclist.

The results found that drivers hit yellow-jacketed cyclists at a slightly higher rate, regardless of scenario, although the difference was not statistically significant. Similarly, when participants rated their ease of detecting the cyclist, there was no significant difference based on the colour of their clothing. Clothing was only a significant factor in one set of situations: for the ‘high cyclist visibility scenarios’ the drivers were able to perceive the yellow-jacketed cyclist at a longer distance (while still hitting them at the same rate). However, the yellow jacket was not helpful in the ‘low cyclist visibility scenarios’, which are considered to be the scenarios where help was needed most.

The authors surmise that one reason the yellow jacket is pointless has to do with the fact that the human eye has poor colour perception in peripheral vision.

Verdict: hi-viz made no difference in avoiding crashes.

Miller et al. (2017). Use of conspicuity aids by cyclists and risk of crashes involving other road users.

The authors looked at cycling-crash cases from Nottingham University Hospitals and for each one contacted the patient for an interview to understand more about the person’s riding style and personal choices about conspicuous clothing at the time of the crash. After successful interviews they then went out to the site of each of those crashes and surveyed random people who were found to be cycling there in a similar manner to the patient, in order to gather ‘control cases’ for comparison purposes. Surveys included questions about colour of clothing, helmet usage, type of riding, cycling experience, and various demographic and personal profile characteristics. Some interesting results were discovered:

Verdict: hi-viz may be harmful owing to the ‘risk compensation’ effect and the use of hi-viz is significantly associated with higher risk of crashes in Nottingham.

Prati (2018). The effect of an Italian nationwide mandatory visibility aids law for cyclists.

In October 2010, Italy passed a law requiring that cyclists wear ‘high visibility’ clothing when riding after dusk and before dawn, in addition to cycle lights. The law specifically says, in rough English translation: ‘cyclists riding outside of centres of population between half an hour after sunset and half an hour before dawn, or riding in tunnels, must wear a retro-reflective high-visibility gilet or bretelle’.

The author studied road crash statistics from before and after the law was passed. She found that the law had no effect on the number nor on the proportion of bicycles involved in road crashes. She offers three possible explanations:

Verdict: the mandatory hi-viz law in Italy is pointless.

Walker et al. (2014). The influence of a bicycle commuter’s appearance on drivers’ overtaking proximities: An on-road test of cyclist stereotypes and high-visibility clothing in the UK.

This is a famous study in which the authors gathered data on a bicycle fitted with a sensor that recorded motorist passing proximities. Over the course of six months the rider repeatedly followed a 26 km route in the southeast of England while wearing one of seven specifically designed outfits, chosen randomly each day. These outfits (shown above) were identified as follows:

A total of 5,690 overtaking events were recorded, fairly evenly spread across the outfits. The average passing distance was 117.5cm. All the outfits were treated about the same by drivers, except the one labelled POLICE, which enjoyed a 4.5cm increase in average passing distance. Furthermore, no matter what the rider was wearing on any given day, approximately 1-2% of drivers came within 50cm of him.

Verdict: hi-viz was found to be useless against close passes.

Additional thoughts: arguably all of the outfits except the CASUAL one could be considered conspicuity-garb. Yet, the only significant change in behaviour observed was correlated with the one-letter difference between the words ‘polite’ and ‘police’. This suggests that conspicuity-garb served no role; drivers even had sufficient time to contemplate a word they read on the back of a vest, and change course accordingly.

In summary, recent scientific research casts severe doubt on hi-viz clothing and other forms of conspicuity-garb. Some results indicate that hi-viz may even be harmful and associated with increased risk of collision. This is especially alarming given the unquestioned yet unearned status that hi-viz currently enjoys in British and American culture. A local school headmaster has recently even penalised children for not wearing hi-viz, an action that in hindsight may have been harmful to the children.

The Camcycle position is simply that clothing choice is up to the individual. What really matters is safe infrastructure: improving driver behaviour by slowing motor vehicle speeds where mixed with people cycling, and otherwise separating and protecting people from higher-speed traffic. This is also the Dutch and Danish approach, nations where hi-viz penetration is near-zero, and cycling safety is far superior to the UK. Hi-viz is doing a lot of harm whenever it distracts politicians from supporting safer infrastructure.