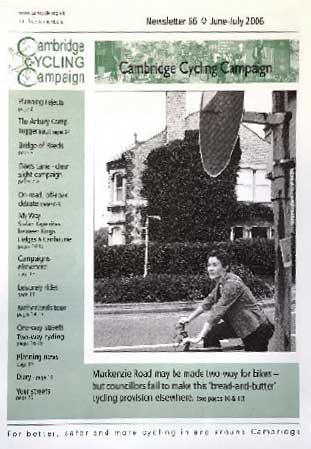 When I first joined the Cambridge Cycling Campaign the newsletter was, apart from the cover, black and white. It was, as now, A4 size and contained photos on most pages, and looked quite professional. I got involved, helping with proof- reading and going along to the newsletter review meetings. The editor was then Mark Irving supported by a very capable team, some of whom are still contributing, though new people have joined us and others have moved on.

A few years later I was persuaded to take over as Newsletter Editor, being elected at the AGM on 7 November 2007, and the first issue I did was Newsletter 75 (December 2007 to January 2008). In design it changed little for the next 24 issues. Usually we aimed at 16 pages, some were more substantial if there was a lot to cover, occasionally it was only 12 pages. But I believe the quality of the content and production were consistently good – due to the high standards of those involved.

What did change was the method of putting together the newsletter. A website called Ensembling was not introduced until January 2009 when it transformed things, thanks to David Earl who created the software. Until then newsletter editing entailed between 200 and 300 emails, many with draft articles attached or saying things like

With Ensembling, comments could be made online which was much easier, and the volume of emails decreased. But some continued, chasing authors for articles, asking them to respond to comments, and constantly reminding people of copy deadlines! Some things don’t change…

The big change under my editorship came in February-March 2012. To mark the 100th issue, it was completely redesigned and in full-colour throughout. The cover photo went right to the edge of the paper, maps were much clearer and adverts more eye-catching with colour. It cost more to produce but we sought more advertisers and felt it was worth the investment. We were also awarded a small grant thanks to one of our members.

Now, another 40 issues further on, there have been more changes. I stepped down at the end of 2014, to be replaced by Sarah Rodger. During her stint the newsletter was redesigned when Camcycle introduced its new brand with Newsletter 126 featuring the new orange logo. What has not changed is the amount of hard work that the editor, designer, authors, photographers, copy-editors and proofreaders all put in and the resulting high quality of Camcycle’s newsletter. Winning the Cambridge Building Society’s Best Charity Magazine award was richly deserved and the judges were rightly ‘amazed at the variety of content’.

Congratulations to those involved and I am sure the Camcycle newsletter will go on being an award-winning newsletter produced to professional standards by a hard-working team of volunteers supported by our charity’s employees.