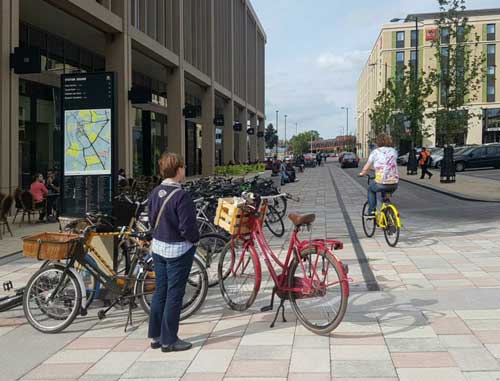 The received wisdom in road design now is that ambiguity is good, even life-saving. ‘Shared space’, ‘courtesy crossings’, and removal of lane markings and traffic signals are standard components in the kitbag.

A courtesy crossing may be a ‘raised table’ (an extended road hump), studs, painted lines or a different colour or texture across the road, or just a pair of dropped kerbs. In reality, most car drivers ignore these cues that they should give way to pedestrians.

Shared space takes this to the next level, by creating even greater ambiguity about who has priority. In reality, a hierarchy quickly emerges, typically with motor vehicles at the top, and disabled pedestrians at the bottom.

Pavements shared with cyclists are constant sources of friction. Although collisions are rare and most people are courteous and thoughtful, it creates a stressful environment, especially for people who are frail, visually-impaired, hard of hearing, accompanying a toddler or walking a dog.

The pedestrian area outside Cambridge station is in fact shared space, subtly indicated by some dropped kerbs. This ambiguity often leads pedestrians to berate people cycling, even when the cyclists are behaving responsibly.

Who has priority at junctions is ambiguous and poorly understood, leading to needless deaths and injuries. British Cycling’s ‘Turning the Corner’ campaign aims to address this by simplifying the rules.

In Paris, it is now legal for cyclists to turn right (equivalent of turning left in the UK) at a red light. Adopting this in the UK would enable cyclists to avoid the danger of being trapped, sometimes fatally, by a left-turning motor vehicle.

Contraflow cycling on one-way residential streets is typically safer than alternative routes via busy main roads. Where this is not legal, some drivers will take it upon themselves to scold or punish cyclists by driving intimidatingly. In a Cambridge street where it has recently been made legal, a resident reports that drivers are now noticeably more courteous and accommodating.

Rules matter: ambiguity may be less dangerous than people imagine, but it’s stressful and discriminatory. We need clear, sensible and consistent rules to manage use of our public spaces.

[This article was first published in the Cambridge Independent on 27 June 2018.]