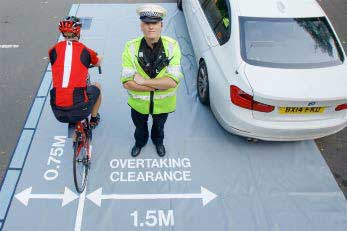 We’ve recently had a few meetings with our local police to discuss the Cambridge implementation of ‘Operation Close Pass’, an initiative launched by West Midlands Police and proven to reduce the incidence of close passes and collisions causing injuries to cyclists. We’ve reported on this before in Newsletter 135. The Cambridge version is ‘Operation Velo’, but so far it’s failed to win the approval of local cyclists. This is mostly because the locations chosen by the police to conduct their initiative have not been in any of the close-pass areas where we’d most like to see improvements. However, there have also been issues with their approach to communications around their operations and the infrequency with which the operations have been carried out.

To help with our discussions, we did a quick poll on Twitter to find out the places that most concern our followers (see table).

You can share your views on Cyclescape 3602 and we will continue to work with the police to get better action on close passes.

We’ve also provided the police with a large box of our ‘Welcome to Cycling‘ leaflets to hand out to any cyclists who are spotted cycling in an unsafe manner and we will work with them to support Operation LIT (Lights Instead of Tickets) later in the year.