We have been asked by the City Council to comment on some changes that are proposed for the big roundabout at the junction of East Road and Elizabeth Way. This junction is one of the most cycle-unfriendly in central Cambridge and not surprisingly has a poor accident record. During the three years 1994 to 1996 inclusive there have been two serious and 27 slight personal injury accidents here. The council now intends to remedy this by

Traffic signals and improved lane markings will help ‘tame’ the roundabout and improve conditions for cyclists (though not much). 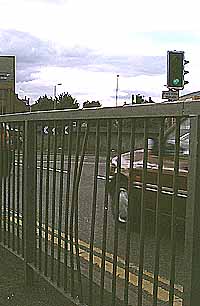 We are a bit concerned, however, about the idea of cyclists being ‘encouraged’ to use the subways if this means that cyclists will find it more difficult to stay on the carriageway. From looking at the plans it looks as if this will be done by using white lines and red surfacing (and not by footway build-outs). The Campaign has asked the Council to ensure that the design of these markings considers both cyclists who wish to use the subways and those who wish to remain on the road and use the roundabout, and does not try to force cyclists to use the subways.