Campaign member Martin Cooper has pointed out the hazards for cyclists caused by three new central refuges in Milton High Street, near Coles Road. The refuges no doubt improve life for pedestrians, which is to be supported, but sadly they’ve made life worse for cyclists.

The roadway now narrows down to between 3.1 and 3.3 m. As Cycle-friendly Infrastructure clearly states (in section 7.6.4), ‘Gaps of 3.1-3.9 m seem to be least satisfactory from the cyclist’s perspective.’ The problem with gaps of this width is that they are too narrow for a car or bus to pass a cyclist alongside the refuge, but wide enough for a driver to think they just might be able to get through. 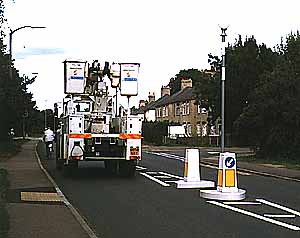 When I went to look at the situation in Milton, the very first cyclist that passed had a different car stop sharply behind him just before each of the three refuges.

And finally, cars are allowed to park along virtually the entire length of road, which means that motor vehicles swing across the central line, and back into the space where cyclists are (much as buses do at the Bridge Street closure).

Martin wrote to his local Councillor, Jane Coston, who has now raised the matter with the County Council, and invited Martin to comment on a future scheme for a cycleway through Milton (see ‘Whatever happened to Butt Lane?’).

We hope the matter can soon be resolved, but the entire scheme seems eerily familiar. Remember Chesterton Road, and the horrendous pinch-points for cyclists at the build-outs there? That was another scheme we weren’t consulted on, and which had a drastic effect on cyclists’ safety.