Remember last year there was a grandiose proposal to build a cycle track all the way from Milton to the outskirts of Impington along Butt Lane? This was a tremendously expensive scheme, and was aimed primarily at providing for school children from Milton attending Impington Village College. However, at the Impington end, the cycle track stopped at the edge of the village just where the road narrows and the bends start. At the Milton end, users would have had to contend with a steep, narrow bridge over the A10 and the entrance to the waste disposal site.

Anyway, for better or worse, the Committee decided not to go ahead with the scheme. This was one of the first decisions made by the new South Cambridgeshire Area Committee. This is one of several being set up to help co-operative decision making on local matters.

The new committee is rather like the Cambridge Traffic Joint Sub-Committee which has been running for many years, in that it has representatives from both the District and County Councils. However, its brief is wider, covering a range of environmental issues. We can expect to hear quite a lot more about it in the future, and we have ordered committee papers for it as we already do for the County’s Environment and Transport Committee, still the final arbiter in transport matters, and the City joint committee.

In the meantime, officers at the County Council are going through a period of insecurity for the second time in two years. When the Environment and Transport department was formed, there was a big rearrangement of jobs and people had to re-apply for the new posts. Now with Peterborough being split off from Cambridgeshire next year, people are being rearranged again. Will there still be a post of cycling officer?

So, what did happen to Butt Lane?

The reason the scheme was dropped was because of fierce opposition from Milton, and in particular the Parish Council, on the grounds that the cycle track was being proposed so that the subsidy on the school bus could be removed. Impington is less than the statutory three miles away, and the subsidy was only provided because there was no satisfactory alternative.

School buses are a controversial subject at any time, so councillors were probably wise to abandon the scheme. It is a shame that the two issues had to become entangled. However, given the escalating cost of the scheme and our doubts about the cost-effectiveness of inter-village links, it is probably for the best that it was dropped. The proposals did not incorporate a comprehensive safe-routes-to-school project.

The decision has freed up several hundred thousand pounds from this year’s budget. The Committee decided to allocate it to three areas: Milton village, Fulbourn Road and Comberton to Barton. We have now received some preliminary plans from the Council.

These are early suggestions rather than definite plans, so there is a significant opportunity to influence them. However, to judge by the repeated proposals, it does appear that South Cambridgeshire councillors consider shared-use footways the cycling panacea.

All three proposals are very straightforward. In Milton, the plan is to put 1 m advisory cycle lanes on both sides of nearly the whole length of the main road (about 1 km) through the village (Cambridge Road from the Tesco roundabout, into High Street). Advisory cycle lanes are dotted lines, which have no legal meaning – cars can park in them and cross into them freely. Their only effect is to encourage moving vehicles to keep further out from the kerb. 1 m is not very wide, but the road is fairly narrow.

The lanes would be interrupted for a short stretch in the middle of the village by the shops, where the road narrows still further. Interestingly, however, the plan shows them continuing past the islands that have recently been installed (see ‘Dangerous Central Refuges in Milton’). I would be very surprised if this is in fact done.

A short stretch of footway at either end of the village would also be widened and be turned into shared-use cycleway. These would provide some missing links in the existing bits of pavement cycling, about which regular readers will know we have serious doubts.

Do you live or work in Milton, or use this road regularly? If so, we’d like to hear your comments.

The main road between Fulbourn and Cambridge, past Fulbourn Hospital, has an extremely poor quality footpath alongside at present. The proposal here is to widen and resurface as a shared cycleway, in the same vein as so many others, on the north side (that is, towards Fulbourn). Yet more shared use.

The road runs parallel to the Fulbourn Old Drift cycle route, which we mentioned last time as being in the pipeline (albeit a blocked pipe at present) to being upgraded where it passes the new Tesco store. It is difficult to see quite who the new scheme would serve. It is a shame that the entire vegetation along this stretch would have to go, and an attractive verge be destroyed if the plan is carried out. 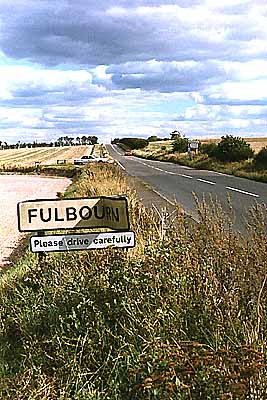 The plan also indicates keeping the existing shared-use pavement between the City boundary and Cherry Hinton bypass. It is labelled ‘good condition’, a description which I would certainly dispute. The scheme would require an in-bound cyclist to cross the main road twice, once on a 60 mph road where there have been several serious crashes in recent years.

As a regular user of this road, I don’t feel the proposals would help me in the slightest. I would be much more interested in a lane on the other side to help me pass the traffic queues in the morning. I will propose to the Council that they actually survey existing users to find out what they would like, rather than taking this arbitrary course.

Another issue in this area is the construction of a new business park next to ARM Computers on the south side of Fulbourn Road, just within the City. This is likely to increase traffic (on top of the impact of the new Tesco), and create a problematic junction on this road.

The existing shared-use cycleway between Comberton and Barton is not too bad at the Comberton end, if somewhat bumpy, but at the Barton end it is abysmal and should never have been designated. The current proposal upgrades this to 1.8 m by filling in the ditch. This is likely to be an expensive scheme for its length, but the route is quite well used even at present, so the expense may be justified.

However, once again the proposals do not address the busy sections through the villages themselves, unlike the new Milton plan, for example. Again, if you are a regular user of this area, do get in touch and let us know what you think.