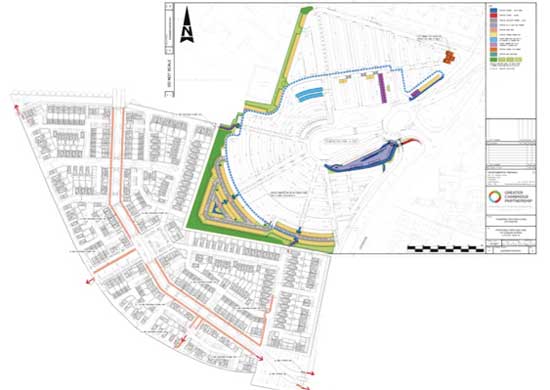 A Camcycle email landed in my inbox a few weeks ago and mentioned a planning application to extend the Trumpington Park & Ride site. I was curious to see how this would affect the cycle routes through the site, particularly the route from the Busway towards Harston, which currently involves an awkward transit of the P&R entrance roundabout and a narrow shared path alongside the main road.

I have spent some time looking at the proposals, and the plans for the cycle routes within the new housing that’s currently being built alongside the P&R site. Piecing together the jigsaw of drawings, I managed to work out what the route would look like, and it’s not great.

At present, one corner of the P&R site is given over to a ‘surface water balancing pond’ – this is a sunken area with reeds that is designed to receive and store rainwater that runs off the car park, and prevent it from overwhelming the storm drains. The extension proposals are to replace this pond with underground storage tanks, and build more parking spaces on the site of the pond. They also plan to squeeze more parking spaces in on other parts of the site, notably around the perimeter. 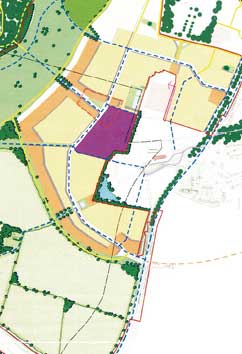 The proposal to build over the balancing pond gives a great opportunity to improve routes for walkers and cyclists, and I am coordinating efforts by Camcycle and the A10 Corridor Cycling Campaign to make this happen.

All the masterplanning for the site has assumed that the balancing pond would be a permanent fixture. Here’s a drawing from the 2007 outline planning application for the Trumpington Meadows development.

As you can see, the balancing pond (in turquoise) currently blocks the diagonal desire line across the site, and so the planners have worked around it.

The housing currently under construction borders the balancing pond and P&R site along two sides. There are two link paths for pedestrians and cyclists between the housing and the P&R – one at each end of the housing development.

I have proposed adding one or possibly two additional accesses once the new extension is built on the site of the balancing pond. There are two ‘parking courtyards’ that currently face onto the boundary fence, placed symmetrically either side of a block of flats. These courtyards could easily be opened up to provide a link through to the extended P&R site, giving a much more direct route for both cyclists and pedestrians. 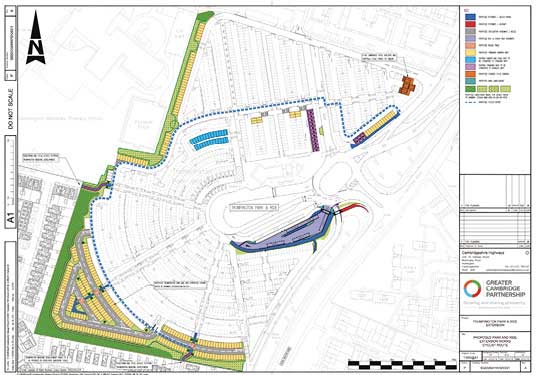 We met the relevant officers at Shire Hall at the end of July. They said that had explored the possibility of making a connection along the lines of my proposal, but had been rebuffed by Barratt Homes, who are reluctant to allow any changes. Also, the City Council’s landscape officers were already worried about the extension to the P&R site and did not want to lose more. Sadly, that leaves us only to hope that the future residents of these new homes may advocate for a better path to be created, or if another P&R site opens near the M11 then this site could be greatly improved.

At present, there is cycle parking in several locations around the site. There are big Velobox lockers behind the terminal, and these will remain in their existing locations.

There is a line of Sheffield stands along the verge close to the end of the Busway path, and these are due to be removed and the space used to create additional car parking spaces. To compensate, the designers propose to install four arch-roofed cycle shelters with Sheffield stands at the north-east corner of the site. The location seems strange as it is not close to any of the main site facilities, but we were informed that it was intended to serve commuters who park and cycle along the maintenance track next to the Busway. The cycle shelter proposals don’t leave enough space for manoeuvring between the lines of stands and the officers agreed to revise the design to meet the city’s Cycle Parking Guide standards.

Over time, the P&R has developed from being just a car park and a bus stop into a significant part of the outer fringe of the city. Once the new housing opens it will have pedestrian and cycle routes leading into all four sides of the site. No provision has been made in the extension plans for better through routes for cyclists, although a small amount of extra pedestrian path will be built to help people walk to the bus terminal from the new parking spaces. The proposed cycling route in the planning applications is laughably circuitous and involves one of the main internal roads used by cars trying to leave the site. We have a few suggestions for how this could be improved, and have asked the designers to try and make a clear and well indicated route through the car park.

The main entrance to the site with its large roundabout has been modified several times in its lifetime as the site has developed. The extension proposals include adding another exit to the roundabout to serve another set of bus stands. This will take the roundabout up to 11 entrances or exits, which is clearly too many. The designers were reluctant to make significant changes to the design at this late stage, but agreed that the site may well be reconfigured again if the new P&R site opens, and that they would bear that in mind.