At the start of July, Mill Road was closed to through traffic, as a sinkhole had appeared near the Co-op. Calm and tranquillity broke out. You could hear people talking across the street. It was at last safe to cycle. Mill Road felt like a place again. Just for two days.

We want to make this permanent. Mill Road has for too long been a conduit for traffic rather than a place for people – the result of cars cutting through it to get to/from the city centre.

Cambridge didn’t grind to a halt in July. Cherry Hinton Road did experience delays, but we believe this problem can be dealt with, as discussed below.

By taking out much of the through traffic, alternative travel becomes much more attractive. For instance, buses would keep to time, and services could be expanded to be much more regular.

However, it’s not enough just to stop through traffic. We’d like to see a whole range of changes. This change is not really an agenda for cycling: it’s about turning Mill Road back into a place again.

Close Mill Road to through traffic 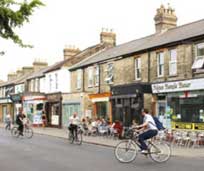 Fundamentally, getting rid of the traffic which is just passing through – surely the vast majority of it – would transform the street. The closure, which would be enforced by cameras (as works effectively elsewhere in the city) would be at the bridge. Buses, cycles, emergency vehicles, and (out of necessity) taxis would be allowed through. Delivery drivers sometimes already exit the same way they came in, or via selected side roads.

The two halves of Mill Road represent the 2nd- and 3rd-worst collision blackspots in the whole of Cambridgeshire. With far less traffic, and slower speeds, cycling becomes safe and attractive – helping get people out of their cars. 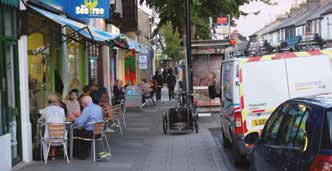 Traders, residents, and everyone would be able to drive in or out at any time of day, just not through. Drivers would access Mill Road either via the inner ring road (for Petersfield) or the outer ring road (Romsey). Traders would find deliveries easier with delivery bays (see below), and a cargo bike scheme.

Many of the shops along Mill Road sell products suitable for delivery using cargo bikes. We would like to see the City Deal subsidising a cargo bike scheme to get this going, which would reduce delivery issues.

Parklets: places for people to stop 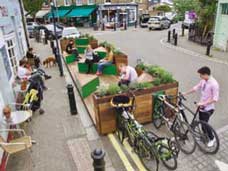 ‘People parking’ is needed along the street, whether just to sit and enjoy the area, or seating for cafés. Let’s have a Healthy Street! Obviously these could have a covering for a rainy day. Parklets would take up about three-quarters of a traffic lane (so not quite half the road) – meaning that traffic passing them would have to be slow.

Mill Road traders suffer from difficulties in delivering – vans block the pavement, causing problems for people on foot and the disabled, and anyone trying to join or cross Mill Road from one of the side streets.

The parklets and other buildouts would incorporate cycle parking, encouraging people to stop at the shops. Cycle parking would be placed more regularly along the road, making it easier to stop at shops. With space reclaimed from the main roadway, pavement space would be freed up for people walking.

Think of all the passing trade that is currently being lost, e.g. people picking up lunch on the way to work. Many people avoid Mill Road, because it’s so polluted and dangerous, and walk/cycle through other streets instead. There is little car parking nearby, so current car users provide little actual passing trade. And Mill Road would become a destination again – somewhere people want to visit and hang around, not a choked street. Remember the Bridge Street bollards – traders were against them, but now the area is thriving. Regular open-air markets would also become possible at weekends.

The pavements and street in general feel quite run down – not surprising, as the street is currently dominated by cars. It could be repaved and turned into a much more pleasant boulevard.

Bus services on time and expanded 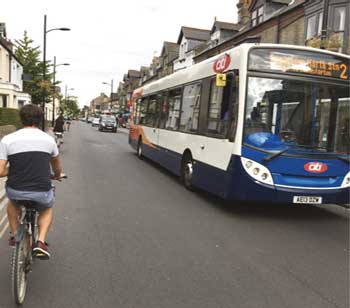 Buses get stuck in traffic, and there are too few services, as the bus companies can’t run a sensible timetable. With the through traffic gone, buses would keep to time, and services can be expanded to be much more regular. The Mayor is also keen on trams – which might become practical along Mill Road with much of the traffic gone.

With so much traffic gone, the carriageway could be narrowed to 5m to make wider and better pavements. Currently, pedestrians and people with mobility difficulties are treated as the lowest of the low, when they should have top priority. Delivery bays help avoid vans on pavements. 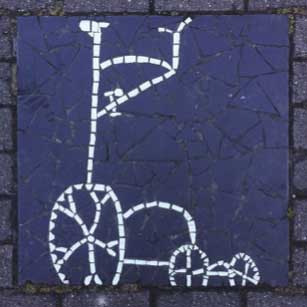 The parklets could have public art, organised by local artists – of whom there are many around Mill Road – and schools.

Because of the parklets and delivery bays (taking up three-quarters of a traffic lane, at selected spots along the route) vehicles being driven past them would slow down. By alternating the sides, traffic would automatically be slower. No need for much in the way of police enforcement.

We think that with most through traffic gone, and speeds automatically lowered thanks to the interspersed parklets and parking bays, taxi access can be retained. Pavement parking (a key problem at present) would be stopped. There remains the need to avoid rat-running down Tenison Road and Devonshire Road, and that would be helped by changing the priority and timings of traffic lights.

Measures to deal with traffic displacement

Much traffic previously using Mill Road would evaporate – see below. For that which remains, Cherry Hinton Road should be prioritised for improvements.

Traffic evaporation – what about surrounding roads?

It’s a common misconception that when streets are changed to stop through traffic all the traffic goes elsewhere. Not so – ‘traffic evaporation’ occurs. People change their behaviour, resulting in a lot of car journeys simply disappearing.

In the case of Mill Road, cycling would at last be safe, bus journeys become practical, and walking without breaking into a cough from the poor air becomes possible.

Of course, some traffic will be displaced, and it’s important that Cherry Hinton Road in particular has action taken on it. Cherry Hinton Road is wide enough for a proper cycleway in many places, again providing an alternative to driving, and ought to be a pleasant tree-lined boulevard. Combined with the proposed Workplace Parking Levy and/or a Toxicity Charge – both of which are needed in Cambridge – traffic in the surrounding area can be minimised.

Mill Road is a much narrower road and, unlike much of Cherry Hinton Road, is a high street, densely lined with shops and other facilities. Pedestrian and cycle traffic is much higher on Mill Road, and 18,000+ people live off Mill Road – a very densely-populated area.

We are calling for a six-month experimental change, to implement a closure to through traffic, and install parklets and road narrowings to demonstrate that Cambridge won’t grind to a halt and that the road can be made a destination again.

If it works (we think it will), streetscape improvements could follow easily and fairly cheaply.

People have been saying for decades that something needs to be done about Mill Road. Councillors who oppose a sensible, comprehensive plan like the one above need to give an alternative that actually tackles the problem head-on. Cambridge cannot go on like this having yet more traffic constantly damaging our city. It’s time to bite the bullet and get on with it.

PS The title of this article is deliberately the same as a viewpoint article we published exactly 10 years ago this month. Isn’t it time something was done at last?