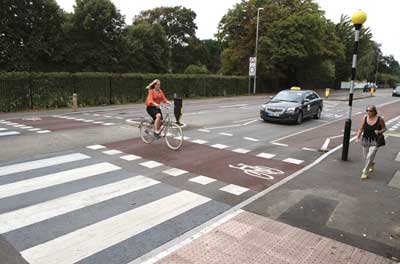 Andrew Gilligan, who was the Cycling Commissioner for London under Mayor Boris Johnson, is now an advisor to the National Infrastructure Committee. He has written a report, Running Out of Road, looking specifically at cycling issues and opportunities in Oxford, Cambridge and Milton Keynes. Of course, Mr Gilligan also has fame as a journalist, and it is his skill in that area that makes this report so readable.

In the past I’ve complained that some campaigners within Cambridge have an attitude that ‘with one jump we can be free’. We have though, with the help of others (and DfT money found down the back of the sofa), made very significant progress in the last ten years.

Mr Gilligan points out that cycling is a serious mode in both Oxford and Cambridge, and that council leaders support cycling in their strategies, but that ‘growth’ risks an unmanageable situation.

Chapters 4 & 5 of the 45-page document specifically deal with Cambridge.

Cambridge is the cycling capital of the English-speaking world, and more and better cycling infrastructure can be delivered in a far shorter timescale and at a far lower cost than any suggested alternatives. He points out that the relatively large difference in current cycling levels within the area are easily explained by the lack of cycling facilities (from Bar Hill for example!). Paragraph 118 criticises the interim transport strategy statement published by Cambridgeshire and Peterborough Mayor, James Palmer, (May 2018) for including no cycling schemes in the list of proposals, yet talking of ‘creating new pedestrian and cycle-friendly infrastructure and facilities’. The report says that cycling from necklace villages is ‘frequently terrifying’, and that provision in new developments ‘often fails’. Who could disagree?

So what of the recommendations?

Regarding the final chapter ‘Getting schemes done’, I shall extract the quote from a former Transport Commissioner for New York:

Efforts to reach an idealised consensus have resulted in years of indecision, inaction and paralysis-by-analysis as leaders attempt to placate the opposition that accompanies any change to the streets.

We have had leaders in the past who took decisions on such things as major street closures, against much opposition. I hope many will read this report and realise that, even if not the whole solution, choosing to prioritise ‘better, safer and more cycling in and around Cambridge’ will enable Cambridge to expand yet to be a vibrant and pleasant place.

Read the full report at: tinyurl.com/runningoutofroad