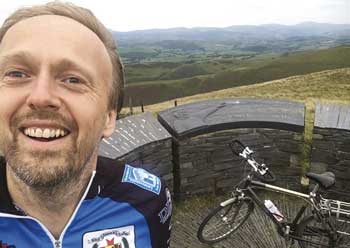 Last year I was made redundant. It was just about the best thing that could have happened to me. I now have a new part-time job working for Cambridge Carbon Footprint’s Open Eco Homes project, which runs two open home events and a series of workshops in September and October every year. As part of this job I cycle around Cambridge meeting eco-home owners who love to open their doors to visitors and share their knowledge about energy-saving technologies. It’s perfect for me.

I spend the rest of my time doing other things I love, including writing and cycling. I’ve always been a commuter cyclist but since being made redundant a big part of each week is now given over to cycling, almost to the point where I consider myself a part-time cyclist. Unpaid of course.

I don’t earn as much post-redundancy but I have lost nearly two stone in weight and am mentally and physically fitter than I’ve been for a very long time. Much of the stress and unhappiness associated with my old job are gone. Cycling an hour or more each day has also helped to ease previous anxiety and depression problems. Taking on rides I haven’t done before has boosted my confidence.

I have stopped thinking of my bike rides as exercise and they have become something akin to a daily spiritual practice: albeit a turbo-charged sweaty one

I feel calmer making decisions off the bike and at the same time exhilarated by everything I see, hear and feel on it. I have stopped thinking of my bike rides as exercise and they have become something akin to a daily spiritual practice: the closest I get to a meditation, albeit a turbo-charged sweaty one. I even find that cycling delivers that holiest of modern grails, ‘living in the moment’. I have become a mindful cyclist.

It would be too dramatic to say that my bike has saved me, but it does make every day very much better. Cycling has become an integral part of my life. The best kind of addiction – one that takes away the edge without taking you over it, unless you’re careless on a mountain road descent!

Discovering the joy of touring

Sometime last year I started waking up to the possibility that this strength growing inside me could be magnified immensely by committing myself fully to the ride: by taking time out, taking myself away from everything I knew and being completely reliant on everything I could pack into four panniers. I wanted to know what my body could teach me about myself. What sort of person I could be if the whole of each day was spent in a mode of discovery, cycling, walking, being, listening, seeing. Not working for someone else’s goals, or being tied to a place, or stuck with an imagined vision of myself.

So last winter, after many months of training and planning, I took seven weeks out of life and cycled solo in a southerly direction through France, Spain and Portugal, something I would never have considered possible even a year ago. I took the train when I needed to, but covered about 1,200km on my second-hand Gazelle touring bike, visiting Normandy, France’s Atlantic Coast, the Pyrenees, Catalonia and the southern regions of Portugal, before finally getting back to Britain via the ferry terminal just north of Bilbao, on the north coast of Spain. With a non-folding bike, this journey sometimes felt like an extreme feat of logistical contortion, demanding a supreme knowledge of national railways, but I was proud to have done the whole journey without getting on an aeroplane.

When I started my trip I was so nervous and worried I really questioned my sanity in taking on such a challenge. What is the worst thing you could do to a person who suffers from anxiety? Take them out of their comfort zone, take away most of their material possessions, remove the roof from over their head, send them alone to many unfamiliar places with several languages they don’t understand, put them under a massive social pressure to succeed, give them a thousand decisions to make all at once. But by the end I found I was not the person I thought I was. I was much stronger, fitter and more resilient than I realised.

And most of all I found that people everywhere were almost universally friendly, kind and helpful. One of my fondest memories is being applauded by a group of French men and women the moment I left the ferry at Caen in northern France to join the busy cycle path that runs next to the terminal (part of Eurovelo 4). Never have I been so appreciated as a cyclist as I have been in France and Spain.

Cycle touring has changed me, and I can’t wait to take on more challenges. This was my first overnight journey on a bike but is now part of a ridiculously big ambition to visit all 26 remaining EU countries by bike and train before Britain finally leaves the EU. It is my own quixotic response to Brexit. A grand départ to take back control. I couldn’t think of anything better than cycling through Europe, crossing as many borders as possible. Sans passeport. What represents freedom of movement better than cycling?

My ambition is to visit all 26 remaining EU countries by bike and train before Britain finally leaves the EU: my own quixotic response to Brexit

I don’t know quite how and if I’ll be able to visit every country, but this summer I’m going to cycle between Dublin and Belfast, over the most contentious post-Brexit border, before heading off to the Benelux countries. In the winter my plan is to head south again – to southern Italy, Malta, Greece and Cyprus – before the worst of the winter arrives. Last time it got down to just above freezing in my tent in southern Portugal so I know when it’s time to come back home. And even if I fail I know that I will have at least done something meaningful to connect with our European neighbours, and to strengthen my own resilience in this changing and difficult time.

Open Eco Homes 2018 will offer free tours of 12 homes across Cambridge, Girton and Impington on Saturday 30 September and Sunday 6 October 2018. Cycling between tours encouraged. For other dates, bookings open in mid-August. More details at www.openecohomes.org

This article is an extract from a book Allan is writing called ‘The Grand Départ – A European Odyssey’. Read more about his trip at www.thegranddepart.com